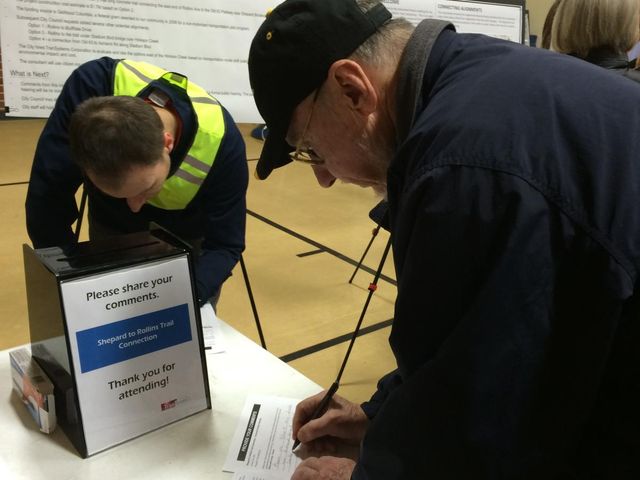 The project's goal is to determine the best way to connect areas around Stadium Boulevard, Old 63 Highway, and Hinkson Creek.

Opinions about the proposals were mixed.

Resident Trina Brunk said she favors an option which would create a sidewalk next to Stadium Boulevard from Old 63 Highway to Ashland Road.

"The only option that makes sense to me is option number four. The riparian area is already, it's already had a lot of negative impacts on it. I would like to see people taking care of it, restoring it, instead of impacting it more really," Brunk said.

11-year-old Elijah Gersky said the construction of a trail along Hinkson Creek would disrupt the land. One of the other options plans to build a trail along the creek to Stadium Boulevard.

"I think it would just disrupt the feel of the place. Like if there was a big slab of concrete jutting through the creek. You know, there's lots of cool secret spots I've found. Like there's waterfalls and little nooks and crannies. It's just special the way it is," Gersky said.

Ted Curtis from Columbia Public works said while opinions about the proposals have been mixed, no one has said the project should not be done at all. Columbia resident Murphy Mastin shares this sentiment.

"I think it's a good thing. I originally come from Iowa, and we don't have access to trails like this where I'm at. You know I think it's a great investment in the health of the community, and overall it's something that I enjoy so I'm happy they're going to be doing it," Mastin said.

A public hearing to discuss the proposals and opinions from Monday night's meeting is set to take place in March.

Editor's note: This story has been updated to change the word "repairing" to "riparian"