Trash complaints against MU fraternity cause a stink for parents 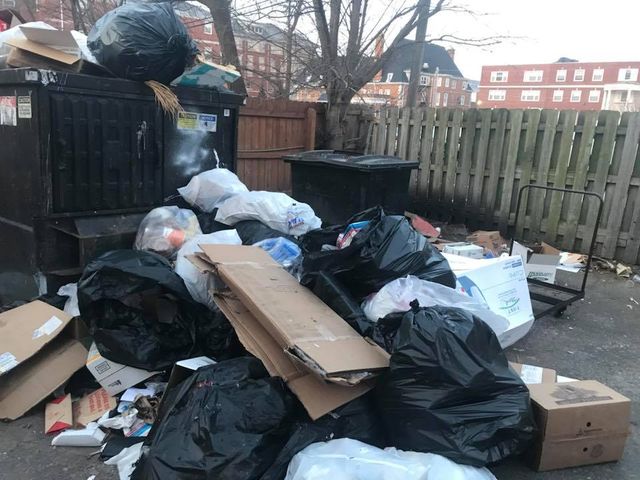 These photos are from January 26. The fraternity has since partially cleaned up the trash. COLUMBIA - From beer cans to beer boxes, trash continues to travel from Alpha Epsilon Pi or AEPi fraternity into the next door Children's House Montessori school, according to parents of the children who attend the school.

"The wind had blown trash all over along the fence, trash all through the alley. It's always been bad, but this was the first time it was really bad," Beatrice Stewart, one of the parents told KOMU 8.

Stewart said the continued presence of trash on the school's playground has parents worried.

"I think there's a lot of concerned parents at the school, me being one of them and I think we've just kind of had enough of it and wanted to do something about it," Stewart said.

Several nuisance complaints have been filed with the city of Columbia against the fraternity in the past, but according to Stewart, trash continues to be a problem.

KOMU 8 found seven nuisance complaints were made to the city dating back to February 2013. The city also filed two nuisance violations against the fraternity's property less than three months ago in November 2017. One for accumulation of garbage and another for accumulation of trash/debris. The city said the fraternity a deadline to pick things up or it would, "take steps to correct the violation."

"I know that the trash has been an ongoing issue, but I don't think they care to do anything about it," Stewart said.

Stewart said she wishes surrounding community members were more conscious of the problem the trash creates.
"I think it's just kind of disheartening that someone in this community, college community and community of Columbia wouldn't have more respect for the property," Stewart said. "We've got kids next door who are learning better and learning about how to grow up and respect the Earth and take care of themselves and the property on which they live."
As a result, Stewart said she thinks both the university and its students should be more aware of their actions.
"I think it's important for Mizzou to recognize the importance of it and also for college kids growing up to learn that they need to take better respect of property," Stewart said.
Leigh Kottwitz, Columbia's neighborhood services manager, said responsibility for keeping property clean ultimately lands on the owner and the city is expected to enforce codes concerning nuisance violations.
"The city of Columbia does have jurisdiction to enforce ordinances throughout the city," Kottwitz said.
However, Kottwitz said the process is made far easier if everyone works together to solve the issue.
"Voluntary compliance is the best outcome for everyone involved," Kottwitz said.
According to Kottwitz, now that the issue has received attention, a member from the city's office of neighborhood services is going to check it out Friday.
If the city issues a nuisance violation and things are not picked up, the city would clean things up for AEPi and the fraternity would have to foot the bill. AEPi would also face being prosecuted for violations of the city's ordinance, one violation per day the mess remains.
The fraternity did not comment on this story.