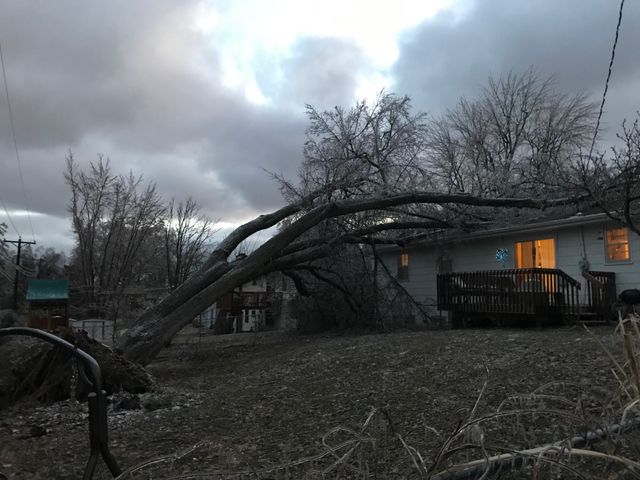 COLUMBIA - Homeowners and local tree removal services are picking up the pieces after Thursday's ice storm caused trees to bend, break and fall on houses across mid-Missouri.

In Columbia, Cindy Rose and her family woke up Thursday morning to find their backyard's elm tree had uprooted and fallen on their roof.

"That morning at about 5:30, we heard a loud noise, thought it was lightning, and realized that it was going on too long. The noise was coming from the back of the house, so we realized it was the tree," Rose said.

"It's been pretty non-stop for the past couple of weeks," he said.

It's a pretty simple formula that leads to falling tree limbs in an ice storm. Ice adds weight to the branches, which puts stress on the points where branches meet the trunk. Gusty winds add even more stress.

That formula left trees and branches scattered across Rose's neighborhood.

"That morning, when the tree fell, we heard lots of other cracking. We heard a loud crack just up the street, so another tree fell," Rose said. "When you drive around the neighborhood, there's lots of neighbors who have large limbs from fallen trees in their yard."

Limbs near the top of the tree can also break off under the extra weight and get stuck in other branches, creating a serious safety hazard until the limb falls or is removed.

"As the days go by, more and more homeowners are noticing large branches that are broken and hung up in the canopy that are extremely dangerous. A lot of people don't notice that right away, especially when it's 9 or 10 degrees out and people don't want to look around their yard," Braik said.

In Rose's case, the tree fell without warning, and she said she's glad no one in her family was hurt.

More freezing rain is forecast to hit the area on Sunday.