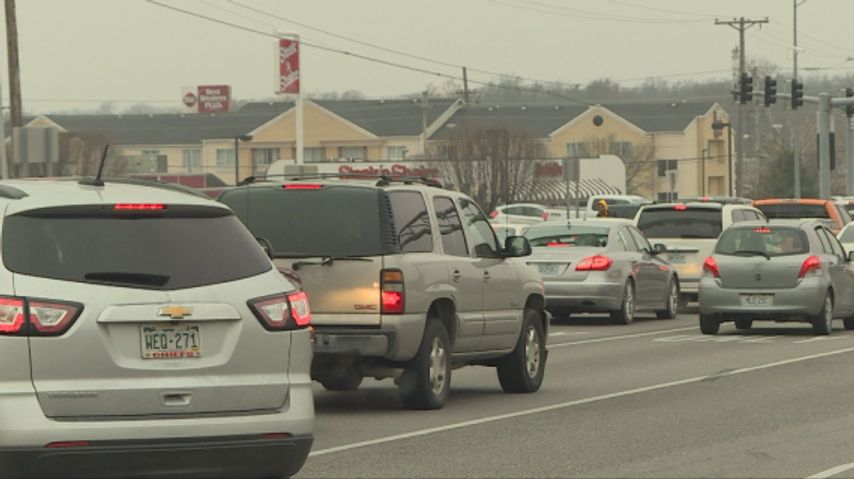 COLUMBIA - With traffic getting increasingly heavy as the holiday approaches, KOMU 8 News got a ride-along with a Missouri State Highway Patrol trooper who said he expects to see an increase in violations.

Trooper Nick March said, "On these busier says, we'll be watching speeds really close, and for following too close, any kind of aggressive driving.

I-70 and other major roads were already seeing a steady stream of traffic Friday.

Gwen Pulliam was going from Saint Louis to Kansas City and said leaving early made a difference.

One St. Louis resident expected it to get worse later.

March said when things get backed up, too many drivers get overly aggressive.

"We really notice an increase in that during the holidays because we have a lot of people in the road with a lot of cars bunched up, so we'll probably pull some cars over."

He said he'll be keeping a close eye out for people staying in the passing lane.

He'll also be looking out for drunk drivers.

"Whenever you have a holiday you're obviously going to have more people out partying, which means you anticipate more intoxicated drivers. But we do that all year long anyway, so technically our job doesn't really change much other than more traffic," he said.

March said drivers shouldn't get frustrated if they get pulled over. He said the goal really is keeping people safe.

March said his supervisors do not require a quota, or a certain number of tickets to be handed out during a specific period of time.

"I'm not in it to write tickets," March said. "I like making sure people obey the law. I'm a full believer that can be accomplished with a warning."

During the reporter ride-along, March pulled over four drivers for various violations including speeding, missing license plates, and outdated registration. He left them all with warnings.

Most people on the road right now are focused on family and fun.

"We're going to the Lyceum Theatre to see 'A Christmas Carol,'" Moyer said.

Pulliam said, "I'm going to Kansas City to be with my family, have lots of fun and lots of eating."

Charlotte Boes said she uses the holiday to donate toys to the less fortunate.

"We've been doing toy runs for the past two months," said Boes. "Delivering kids toys for Salvation Army, Goodwill and supporting with the kids who can't have a Christmas."

Travellers may feel jolly about gas prices. According to Gas Buddy, this month's are lower than November.

Kansas City traveler Maria Letcher was headed to North Carolina and said these are the best prices she's seen yet.

"This looks much better now, hopefully it's the same for the rest of the trip," she said.

Here are some holiday safety tips from AAA Exchange.