Troopers bike 140 miles to raise money for boy with leukemia 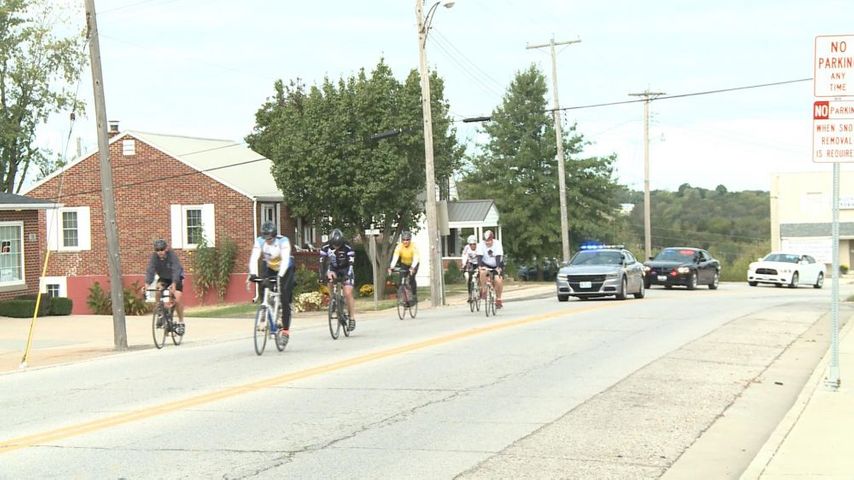 LINN - State troopers usually spend their days and nights riding the highway in their patrol cars, but on Saturday, some Missouri state troopers and supporters finished a 140-mile, two-day bike trek that took them from St. Louis Children's Hospital to Linn. The bike ride raised $3,500 to support Tony Peters, 7, a second-grader from Linn recovering from leukemia.

The bike ride, dubbed "Troopers for Tony," was spearheaded by Missouri State Highway Patrol Capt. Vince Rice, who heads the Patrol's training division. Rice said Tony's diagnosis had a big impact throughout the small community, and he wanted to find a way to help.

"A lot of folks were making donations right away and I was just trying to think of a way that maybe I could raise some more money," Rice said. "I think it's just a testament to small town life anywhere, not just the Highway Patrol and law enforcement."

Rice then got his fellow troopers together and planned the ride. Originally, the plan was to start in Linn and bike to the hospital. But as Tony made strides in his recovery, Rice and troopers decided to reverse it.

Tony, who dreams of becoming a state trooper when he grows up, was driven in an MSHP patrol car behind the bikers as they arrived in Linn. Tony said the experience was "really fun."

"We got to pull somebody over," Tony said.  "We got to watch the bikers riding and I got to use a lot of gizmos and gadgets."

Tony got the opportunity to turn on the patrol car's lights and siren. He said he dreams of becoming a trooper because he wants to protect the public and "keep people from having accidents."

Rice said these efforts show how law enforcement across North America is a family.

"We stand united in cause, regardless of what that cause may be," Rice said. "It was really impressive to see the support we got throughout North America."

Family members said Tony's recovery from leukemia is going very well and they expect him to fully recuperate from the disease.

Tony and his family just rode into town with a state trooper. @KOMUnews pic.twitter.com/WcDOVwfnlp

In addition to the $3500 raised today, Tony got all sorts of donations, including challenge coins. @KOMUnews pic.twitter.com/g1q9WN79OL