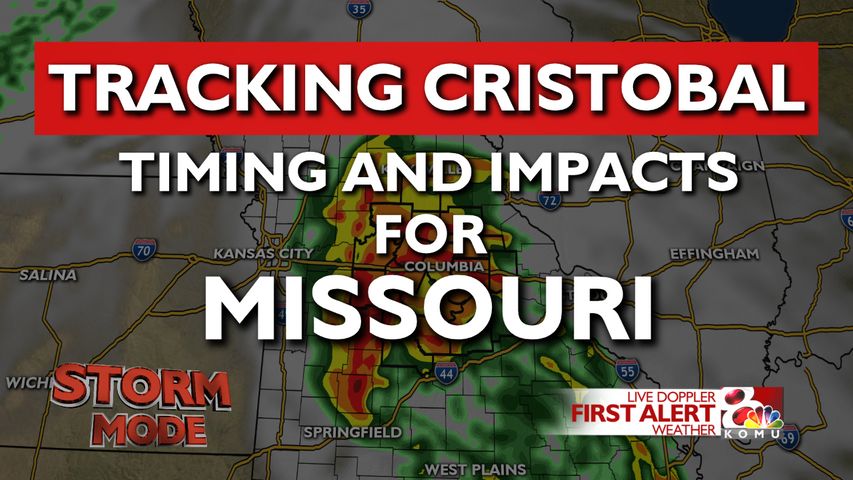 MISSOURI - Tropical Storm Cristobal made landfall in southeast Louisiana late Sunday afternoon. It is the second earliest landfall of a named tropical storm in Louisiana since records began in 1851. The earliest is Tropical Storm Arlene on May 30, 1959.

The storm packed a punch with flash flooding in Louisiana, Mississippi, Florida and Georgia along with tornadoes in Florida. Tropical-storm-force sustained winds of 39-73 mph were also felt.

The storm has since weakened and is now a tropical depression. This is the earliest that a storm with tropical conditions has made its way to central Missouri in the calendar year.

After midnight Tuesday morning we will be watching rain move into central Missouri. Heavy rainfall along with thunder, lightning, and stronger winds are expected by about 4am near I-70. The heavy rain and thunderstorms will continue through the morning. Rain should be mostly north of I-70 by 11am and north of Macon around 1pm.

One to four inches of rainfall is expected along with winds gusting around 35 mph as Tropical Depression Cristobal moves from south to north through the middle of Missouri Tuesday morning. The highest amounts are expected near and west of HWY 63 through central Missouri, and west of HWY 54 closer to the Lake of the Ozarks. Only about 1-2" of rain is expected east of HWY 63.

The highest amount of rainfall accumulation on Tuesday morning is expected west of HWY 63. Remember, do not cross a road covered in water. pic.twitter.com/LBzA9UreJy

A Flash Flood Watch is in effect for this period as streams and creeks may quickly rise and roads may become covered in water. Use extra caution Tuesday morning and do not cross a road covered in water. This threat may be at its highest between 7am and 2pm.

We will see the sun Tuesday afternoon with a few lingering showers or thunderstorms by late afternoon and evening. We'll be watching to see if these isolated storms turn severe, which is a slight possibility if the atmosphere has enough time to recover from the morning tropical depression.

The wind will really pick up Wednesday morning with gusts around 40 mph expected. There is also a chance for a few passing showers or sprinkles north of I-70 between 8am and 2pm Wednesday. Temps will likely only top out in the lower 70s on Wednesday.

Then, a much cooler and drier trend will round out the week with highs near 80 and lows near 60 under sunny skies.

PROGRAMMING NOTE: If you use a satellite dish or antenna you may lose signal during heavy showers and thunderstorms. Remember, you can always stream KOMU 8 newscasts on komu.com, the KOMU 8 Weather App, and now on ROKU devices by searching KOMU 8 and clicking "Add Channel". You can always stay up to date, no matter the weather.

For the latest forecast and tracking download the KOMU 8 Weather & Traffic App on Apple and Android devices.