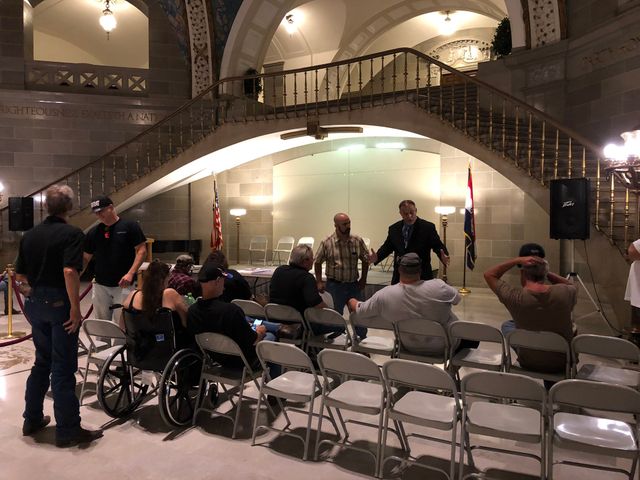 JEFFERSON CITY- A group of Missouri protesters are taking a stand against self-driving trucks in the state.

Over 29 states have already passed legislation regulating autonomous vehicles, including neighboring Illinois. However, these states are not outlawing self-driving cars. They all have created a set code of regulations to monitor new technology in vehicles.

Scott Jordan, president of Powerhouse Transportation, a trucking company in Peculiar, Missouri, said Missourians need to stand their ground so that self driving cars don’t cause deaths on the roads.

“If they run over you, you are just an attributable loss,” Jordan said.

Billy Bogar, truck driver and member of the protest, said he is concerned that if self-driving vehicles become legalized, he won’t be able to put food on the table.

“I need this business to work. I have to stay driving,” Bogar said.

They are in support of any new legislation that would outlaw the advances of self driving technology.

Representative Mike Moon is in support of this new legislation and said that truck drivers should have the freedom to do what they choose.

Christy Rowe, another protester said that if people have self-driving vehicles the economy will not remain the same.

Members of the protest plan to attend “10-4”, a protest on the National Mall in Washington, D.C. on October 4th to support the outlawing of autonomous vehicles.

Bogar said this is the next step for them in order to plan on drafting a bill to prohibit self-driving trucks.