True/False Artists and Volunteers Create Artwork for Each Venue 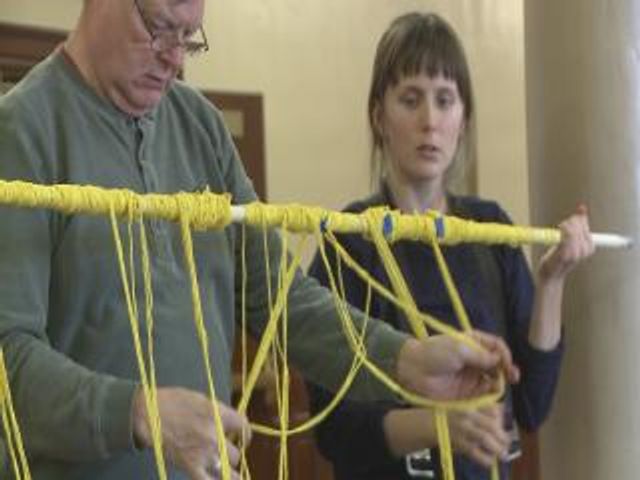 COLUMBIA - True/False Film Fest organizers, volunteers and artists began decorating Columbia Wednesday morning and planned to work through the day to have artwork in the lobbies of every venue.

Jesse Hall on MU's campus is the largest venue for the event, and for the first time will have a major artwork display.

David Dunstedter is a crew chief for artwork displays and has volunteered hours of his time for the past 11 years for True/False. He said in the past Jesse Hall had some small decorations and posters here and there, but this is the first year the university is allowing for a very large art display.

Dunstedter said he has noticed more influence and input from MU regarding the festival and he said he believes this is creating an even better atmosphere for volunteers.

Eric Rieger is the artist behind the display in Jesse Hall. The display is yarn of many colors, which comes down from the third balcony inside Jesse. Rieger has created artwork similar to this in places all over the United States.

Rieger titled the piece 'Resilience' after doing research on the history of Jesse Hall and MU's campus.

"I realized that not only had the first building burned down, but Jesse Hall, the replacement actually went through some of its own problems and issues, and throughout all those things that had happened to Jesse Hall it still remained its spirit and been a positive place for people to come," Rieger said.

Artwork displays will be set up in the lobbies of Missouri United Methodist Church and Ragtag Cinema, and will also be scattered throughout downtown. Dunstedter said the artwork displayed outside in certain places of downtown is to get people out to see the many things True/False has to offer.

"True/False is a complete experience. That means it is about art, it's about music, and it's about documentary films. We want people to enjoy themselves to look at the lobbies, look at the different pieces of art as they go in and interact with the films," Dunstedter said.

The first film will be shown Wednesday at 6:30 p.m. at Ragtag. Reserved tickets are not needed for the event. The main events begin Thursday. To see the full True/False Film Fest schedule, visit their website.