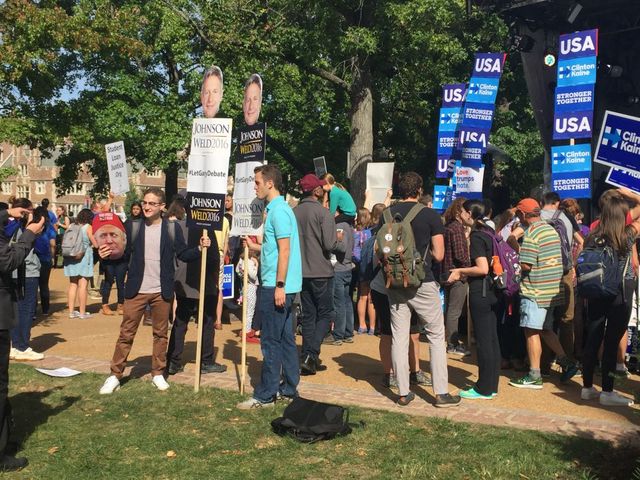 ST. LOUIS — Supporters for the three major presidential candidates were at Washington University in St. Louis Sunday preparing for the second debate. The event has been set up in a town hall format where citizens will ask half of the questions and the moderators will ask the other half.

Many voters were interested to see how Donald Trump will answer the criticisms over the recently leaked audio where he referred to women using vulgar language.

Trump supporter Mindy Patterson said "it was 11 years ago and, as a voter, I really don't care what he said 11 years ago."

Some Hillary Clinton supporters said they predict Trump will retaliate by highlighting certain scandals from her personal history.

"I am really curious to see how she is going to react to his aggression and kind of his bringing up stuff from the past." Clinton supporter Dana Dann-Messier said.

While both Trump and Clinton supporters said they were excited for the debate, Gary Johnson supporter, Andrew Eichen, said he was disappointed the candidate wasn't allowed to participate.

"It is really disappointing because, you know, you have Trump on the right and Hillary on the left and you have this huge six lane highway in between that nobody is trying to appeal to," Eichen said.

Law enforcement and campus officials increased their security for Sunday's event. Multiple checkpoints were set up as well as a designated area for protesters. Campus access was limited to students, campaign personnel, approved media and those with tickets to debate activities. But both Trump and Hillary supporters agree the extra security was warranted.

"The fact that Ferguson is not far from here and there have been outbreaks of violence popping up at Trump rallies and other rallies all over the country, I think it is worthy of having heightened security," Patterson said.

"I'm willing to put up with a little bit of security just to show the kids this, see all of the hubbub and the energy. So it's a small price to pay I think," Dann-Messier said.

Despite the additional security, supporters were out voicing their opinions as early as 6 a.m.