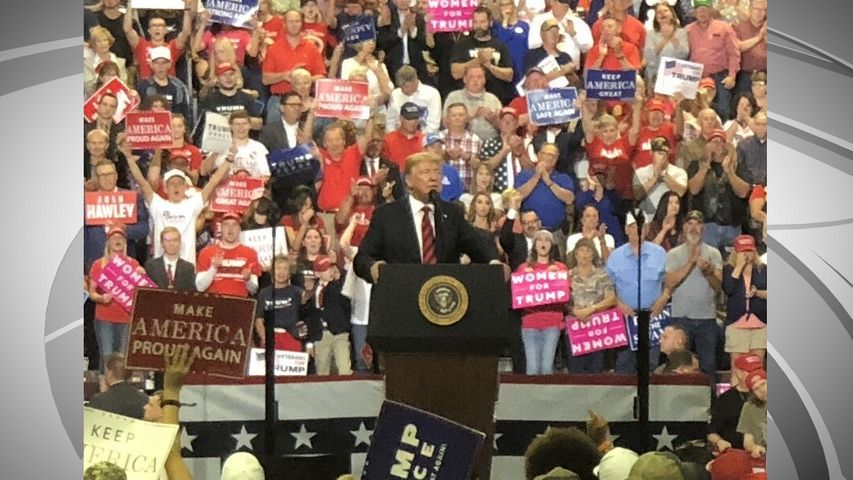 Trump spoke in front of an at-capacity crowd at JQH Arena on the Missouri State University campus shortly before 7 p.m.

Trump opened by telling the cheering crowd of thousands in Springfield, "our country is respected again."

He said that's because "we are finally putting America first."

The president is in Missouri to campaign for Missouri Attorney General Josh Hawley, who is challenging incumbent Democratic U.S. Sen. Claire McCaskill. Trump has been campaigning aggressively to help the Senate expand its narrow 51-49 majority in the Senate.

A “U-S-A” chant broke out in JQH Arena after the National Anthem. The crowd is LOUD. @KOMUnews pic.twitter.com/xqnietguBu

WATCH: @realDonaldTrump just walked into the arena and the crowd answered with the loudest cheer yet. @KOMUnews pic.twitter.com/OMJgPIgrr8

He said he received a "beautiful letter" two days ago from Kim. But he's not saying what the letter said.

The president and Kim met in June in Singapore to discuss denuclearizing the Korean Peninsula.

Trump said he has a "very good" relationship with Kim. He noted North Korea returned Americans being held there, as well as remains of American service members who went missing during the Korean War.

The president also said North Korea has not conducted any ballistic missile or nuclear weapons tests in months.