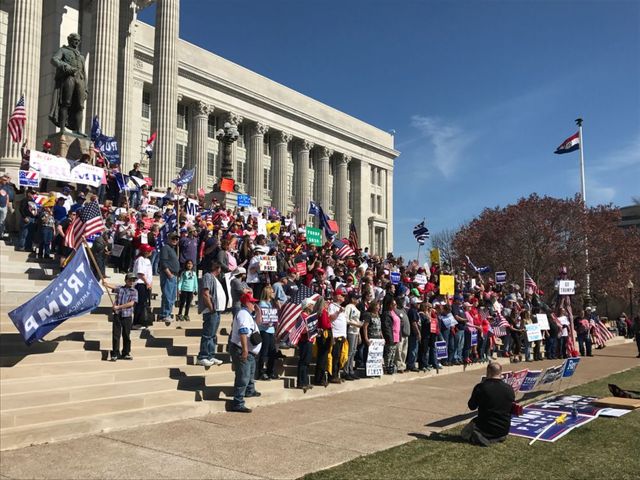 “Our mission is a mission of unity to support Donald Trump, our president, and to reach across the aisle to help others understand the positive aspects of our future,” said Karen Trifonoff, one of the event’s coordinators.

Trifinoff said she has done similar marches in the past, but none to this extent.

Anita Record, one of the marchers, said she just wants other people to "give the man a chance."

However, not everyone at the march supported Trump.

Caleb Elbourn, who protested the march, said he wanted to explain his ideas and opinion. He held a sign that said “An Injury to One is an Injury to Us All.”

“These people need to focus on their class and working in their interest as a class, rather than working against what they really should be fighting for,” Elbourn said.

Robert Rasmussen said he was just there to observe the event. “I feel like part of the problem is that we are all so just so entrenched in our own camps that we’re just trying to say other things to other people,” Rasmussen said.

The participants marched around the Capitol before gathering again on the steps outside the building. After the march, people could listen to guest speakers inside the rotunda.