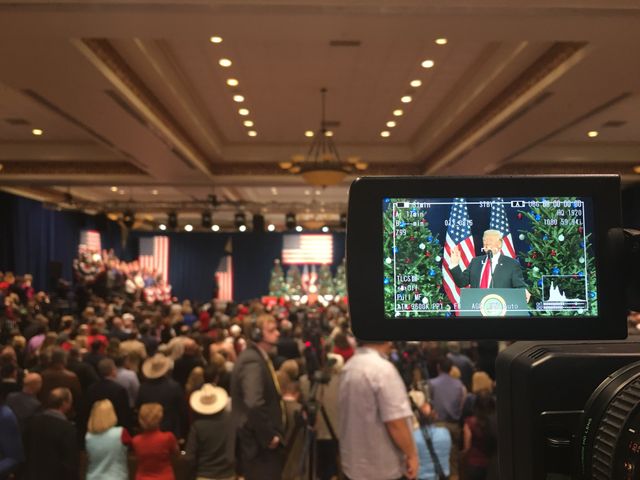 ST. CHARLES - President Donald Trump visited Saint Charles Wednesday to discuss his plans to bring tax relief to the American people. He spoke at the Saint Charles Convention Center, focusing on how his reform plan would bring tax cuts to working families and small businesses.

Trump’s tax reform bill has passed through the House of Representatives and is now waiting on the Senate.

Trump centered much of his speech on bringing back a time of “Main Street America,” when small businesses thrived in downtown areas. That was part of the reason why he came to St. Charles and he mentioned two local businesses during his remarks.

Throughout the tax reform process, Trump and Missouri State Treasurer Eric Schmitt have mentioned the plan will be good for local business.

“Any time you get a lower tax, that’s more money you can spend on sales and marketing and R&D,” he said.

Schilling wanted to create a coworking space for start up companies to collaborate and share in their growth. Right now, OPO Start-Ups houses 60 companies and about 250 employees, all of which he said would benefit from the president’s tax plan.

“On the corporate side, you’re gonna have a leveling effect that small pass-through businesses will be taxed at a similar rate that the C-corporations are, and that’s important because that gives us a level playing field,” Schilling said.

Trump said it's not only businesses that will benefit.

“I want a tax code that is simple and fair and that’s for all Americans,” Trump said.

Some critics have said Trump's plan will hurt the middle class, something he disputes.

“Middle class families won’t just see their taxes go down, they’ll see their income go up with an average of $4,000,” Trump said.

Traci Gleason, with the Missouri Budget Report, said the plan is just so much smoke and mirrors.

“The Senate tax cut plan makes permanent tax cuts for corporations, and other pieces that would go to the top 1 percent essentially,” Gleason said. “If you were an average family, your taxes would actually increase.”

Gleason said the tax cut could drive the country into a deficit.

“There’s a cost at 1.5 trillion dollars to this bill that would ultimately need to be paid for,” she said.

If the plan passes in the Senate, it still has a few more steps before it's realized, but President Trump is confident in its success.

“If it passes, it goes into this beautiful committee, this beautiful, I call it a pot. And we mix it up and we stir it up and we bring the best things out, and you’re gonna have something, I predict, that’s going to be very, very special,” President Trump said.