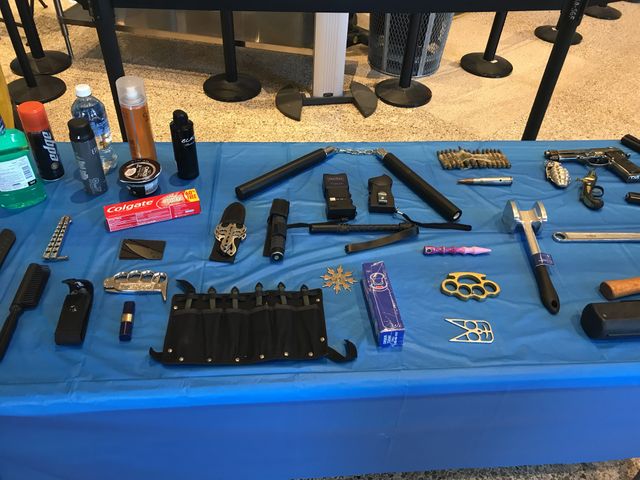 COLUMBIA - With the number of travelers expected to increase dramatically this weekend, thanks to the holiday and schools dismissing, the Transportation Security Administration reminded air travelers about some things they'll want to be sure to leave at home.

Agents held a demonstration Thursday on what passengers can and can not bring aboard. The goal was to help the check-in process go easier as well.

TSA Regional Spokes person Mark Howell said the top most common prohibited items brought to the airport are liquids, despite rules restricting them being in place for years.

Howell said on average at Columbia Regional airport, 50 pounds of items per month are collected, but if liquids were included the number would be much higher.

There is only one exception for bringing a liquid over 3.4 ounces.

"If you're traveling with medically necessary liquids and that could be medications, breast milk formula, thing to feed a child, those will be allowed through the checkpoint, said Howell."

Howell showed a table of prohibited items surrendered at the Columbia Regional airport.

The number of items are surrendered increases during the holidays.

He said despite some beliefs, the TSA does not confiscate items.

"Every time we have a prohibited item that comes to the check point like a kinfe or a  tool or something like that, we're gonna give the passengers the option to get rid of it," said Howell.

Options passengers have include:

During the holidays people travel with gifts, and the TSA reminded that passengers must travel with gifts unwrapped. Agents at checkpoints will unwrap gifts regardless. The TSA recommends using gifts bags if you are transporting gifts.

Another common thing TSA sees during the holidays is people trying to bring snow globes aboard, which are also not allowed.

Other often-collected items not allowed in carry-on luggage include knives, some tools and ammunition.

"Nationwide we are seeing the trend go way up as well, last year we had a total of 3,391 guns across the US. That number has skyrocketed and it's up over 4,000 so far this year," Howell said.

Federal Security Director for the state of Missouri, Jim Spriggs, said situations with dangerous items, like explosives, are directed to law enforcement.

"We engage law enforcement. We aren't properly trained, like if it's a gun," Spriggs said.

"At both of those airports they have explosive experts, he said, "They have access to other federal agencies."

You can bring a gun in checked luggage if it's packed properly. You can find instructions at the TSA's website.

Howell said these rules aren't created to cause a hassle.

"A lot of the times over the holidays and really through out the year people are upset that we have to ask them to surrender these items at the checkpoint We're not here to hassle you or separate you from your items. We just wanna make sure you get to point A and point B safely," said Howell.

Spriggs said more prohibited items are seen during the holidays because of first-time fliers.

"During the holiday people are less experienced and because of that we see more prohibited items. Experienced travelers have a tendency to check first," said Spriggs.

But for frequent airport flier Jihyun Park, a Chicago native visiting Columbia, it's not so simple. She said she still runs into difficulties at check in.

"They told me I can't travel with my skirt because of the silver zipper," she said. "They told me not to wear this skirt next time."

Howell recommends getting to the airport an hour and a half before for holiday travel.

You can find the list of what not to bring with guidelines online at www.tsa.gov

You can also use their tools app, where you type in the tool and it will tell you if the item is prohibited.

"Make sure you do a five minute sweep of you bag before you come to the airport and that's really going to keep you out of trouble and keep the lines moving," said Howell.