The fire took place at a home on the corner of Locust Street. 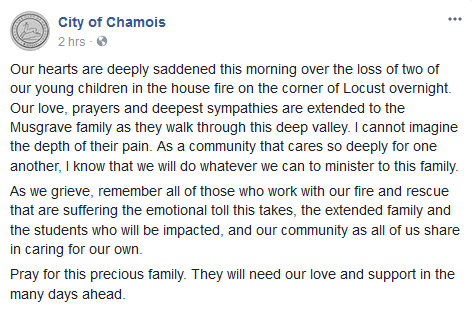 At approximately 10:15 p.m. Sunday night, firefighters and deputies responded to the house fire. The sheriff's office said the house was fully engulfed upon first responders' arrival and firefighters tried but could not enter the home.

“It’s a very emotional task and our hearts, first and foremost, go out to the family,” Sheriff Michael Bonham said in a release. “But we’re also looking at our first-responders, especially our firefighters and dispatchers. It’s a very difficult situation to be dealing with deaths like this that include children.”

The cause of the fire is under investigation by the state fire marshal’s office, but Bonham said it doesn’t appear to have been deliberately set.

“We’re not seeing anything at this point to give us cause that it’s suspicious,” Bonham said.

Bonham also said Heritage Bank of Chamois opened an account for the family. Anyone wanting to make monetary donations to the family can call the bank directly at (573) 763-5958.

We will update this post with more information as it becomes available.