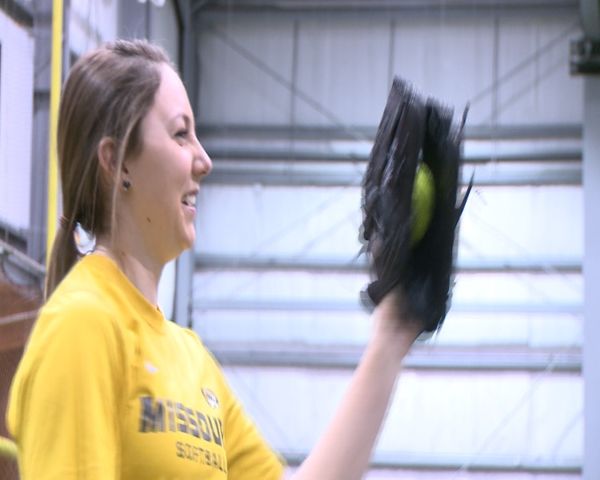 COLUMBIA - The name Chelsea Thomas and Missouri Softball have been synonymous with each other for the past five years.

But for the first time since Thomas joined Coach Ehren Earleywine's team back in 2009, the Missouri Tigers will begin its season without one of the more dominant pitchers from the college ranks, and arguably the best softball player Missouri ever had. In her stead, a pair of freshman strike out on their college careers with high hopes and a desire to blaze a trail apart from a player whose proverbial shadow stretches far and wide.

"We're excited," said freshman pitcher Casey Stangel. "We're excited for everything that Chelsea did and we're excited to start our own journey and take it the next four years, so no pressure, just excited to finally be here and be out there."

"She was an amazing pitcher and someone who I, even coming in, when I first verballed here, someone I looked up to and was such an amazing role model on and off the field," said freshman pitcher Tori Finucane. "And so I'm kind of excited to even step on the same mound as her and all that kind of stuff, but also do my own thing."

With the freshman on the roster and senior transfer Alora Marble in the mix to pitch as well, Coach Earleywine has some flexibility with whom he starts in the circle. That will help keep his pitchers fresh all season long, and after a season where Thomas was the only pitcher on the roster, give him some peace of mind as well.

"I have a greater appreciation for it [having multiple pitchers] having gone through the Chelsea situation," Earleywine said. "I'm really, really grateful. I had a lot of sleepless nights last season dealing with the question, 'Who's going to pitch the next day?'"

After watching his team play in the fall, Earleywine said they could still win games without Thomas on the mound, but those wins might look a little different.

"With Chelsea on the mound, it was going to be 10-15 strikeouts, and that was the way we won," Earleywine said. "A win now could mean 10-12 groundouts because of the good drop ball of Casey Stangel, or it could mean 7-10 flyouts because Tori Finucane's more of a riseball pitcher. So winning may look different."

Earleywine said his pitchers have looked good in practice, but they have yet to play the tough competition that is to come in the regular season, and he is looking forward to seeing how they handle the pressure.

The regular season starts on Friday for the Tigers in Waco, Texas, for the Baylor Getterman Classic.