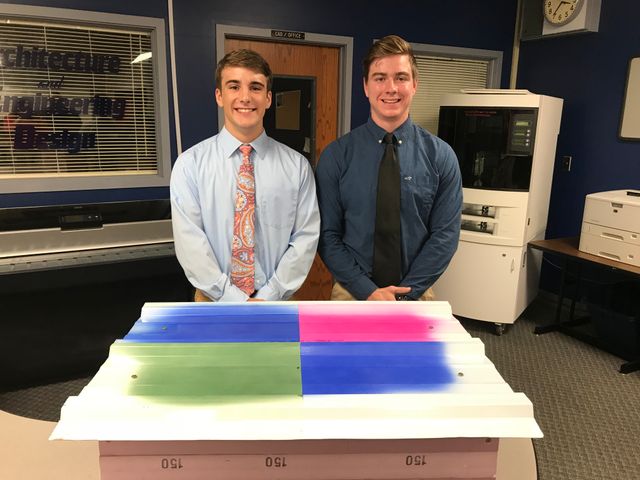 MOBERLY - Two teens from the Moberly Area Technical Center (MATC) are showing off their inventive chops at a national competition.

The USA National Skills and Leadership Conference is "a showcase of career and technical education students," which began Monday.

Chameleon Roofing is just one of the many products competing in the event.

The paint product is designed to regulate heating and cooling to make "your energy efficiency be the best it can be in your household," team member Lukas Vitt said.

Vitt and Michael Boeding will be at nationals to represent the team that created the paint.

The product is applied to the roof of a building and adapts as the temperature changes using something called thermochromic pigments.

"Chameleon Roofing is designed to turn a darker color whenever it is cold outside, to absorb more heat from the sun," Vitt said. "and turn a lighter color like white, in the summertime, so it can reflect off that heat and keep your house cooler."

The production process started roughly a year ago with a specific goal in mind.  MATC Director Sam Richardson had been to nationals before with another team and told the teens he wanted to go back.

"You guys make this happen," he said.

Richardson said the team was more than willing to accept the challenge.

"I think we all knew that they had that ability in them, had the skill set, had the creative thinking, the problem solving," he said. "They took a little encouragement and you know, here they are going to nationals."

Boeding said the product started as an idea he had in his notes.

"I think this idea I actually came up with about a year ago, but it wasn't this specific idea," he said. "It was actually for the rooms in your house to change color based on different seasons when you have a little temperature change in your house."

After talking with his team, they said focusing on the outside of the house, like the siding, would be a better idea. Then, the group made the final decision to use it for roofing.

"We're at the point where we are trying to get more commercial notice of the product," Boeding said.

He said the creators of "Chameleon Roofing" are hoping to show it to more people and eventually get it into production.

"We're at the point where it hasn't been shown that much. It's only been shown to a few judges, and then the people that are in our community that have actually seen it and sponsored it,"  Boeding said.

Vitt said the paint can be beneficial for reasons such as increased energy efficiency and detecting insulation issues by a lack of color change.

The current prototype is set to change colors when the temperature goes above or below 72 degrees Fahrenheit. However, Boeding said, the temperature limit can be changed for different climates.

Visit the SkillsUSA website for the full schedule of the week-long event.