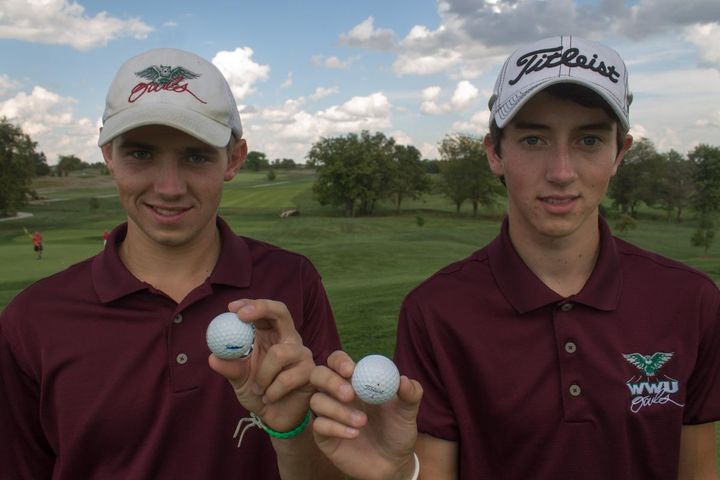 "It's a par-5, so I'm looking at a birdie opportunity even though it was quite windy," McKenzie said. "I'm standing on the tee thinking I need to make birdie here. I just got a bogey on the last hole. I was quite annoyed. I gave it a bit extra on the tee."

The William Woods golf team were the hosts of its Fall Invitational at the course the team practices on daily.The next shot the Portsmouth, England native took, was not practice. That next shot he took landed him in the history books.

"I was close to laying up to be honest," he said. All I had to do is carry the water, hit it up there, and let the wind bring it down."

His Titleist Pro-V golf ball rolled into the cup to score a double eagle. A double eagle is scored when a golfer hits three-strokes under par at a single hole.

I couldn't see it at all. And I was just thinking ‘Oh my god, I think I've made an albatross. I wasn't 100 percent until I walked up to the cup and saw it. Best shot of my life, couldn't hit it any better."

This time, it was McKenzie's teammate, 21-year-old junior Julian Taylor. Taylor struck his first shot just beyond the spot his teammate hit minutes ago.

The NAIA All-American from York, England, grabbed a rescue club from his bag and took his stroke. His ball ran down the greens' slope on the right and into the cup for a double eagle.

"I hit a good drive down the middle and I had 211 yards into the pin," McKenzie said. "I was probably 199 yards to carry over the water so I chose a rescue club. I knew if I hit a high fade up into the wind, it would be close to the green."

Barry Doty, William Woods' head golf coach, arrived a few holes later in his golf cart just as word of the scores was traveling around the course.

"It was a neat deal," said Barry Doty, William Woods' head golf coach. "Billy made the first one and I had just pulled up and he was waving his arms and then I get up there and he said he made a two on the hole I didn't find out about Julian's until a couple of holes later. He was teeing off on two and I told him about Billy's deal and he said ‘Coach, I hit one too!' So that was pretty awesome."

The duo are the first amateurs to double eagle in the same round according to Michael Christensen, founder of The Double Eagle Club. He says the occurrence that two double eagles are scored in the same tournament has happened, five times.

More rare is a double eagle in the same round. It's only happened once: On May 21, 1984, when Manuel Land and Louie Smith both scored a double eagle on the same hole at Pecan Valley Golf Course in Texas. The duo played their double eagle scores into the cup on the par-5, 525-yard, 18th hole.