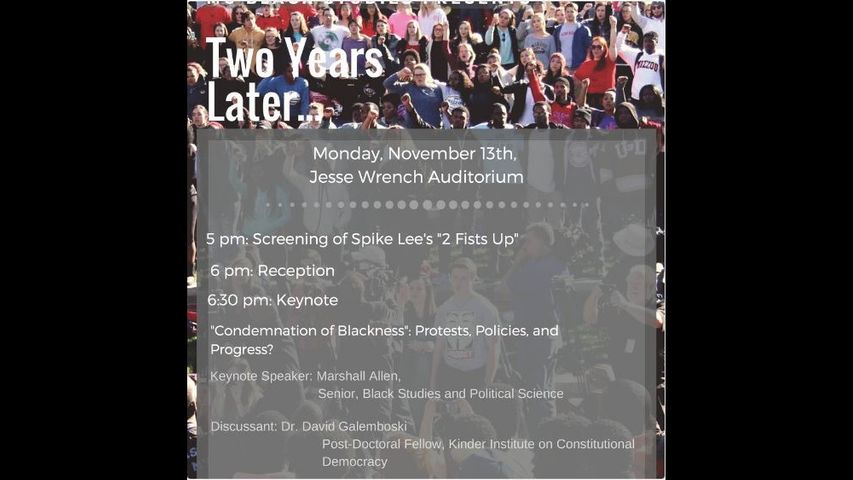 COLUMBIA - Community members gathered Monday to reflect on race-related events from the fall of 2015, when MU campus protests lead by Concerned Student 1950 made national news.

The event, called "Two Years Later," consisted of a screening of Spike Lee's "2 Fist Up", a reception and a keynote speech.  It was meant to facilitate a conversation about the current state of race relations on campus and across the state and nation.

Stephanie Shonekan, MU Black Studies Department chair, said “Ensuring that this campus is a welcoming one for everybody is not work that is done in a few days or even a few years and finished.”

After numerous racial incidents on campus, the official protests began when CS1950 put on a demonstration at MU's 2015 Homecoming Parade. This began a series of events that led to the resignation of Tim Wolfe, the UM System President.

"We pause and celebrate what happened two years ago and commemorate it, and try to reflect on those events that got us national attention and try to figure out what we've done since then and what we still need to do to move forward," Shonekan said.

She said everyone pitched in to make history.

“We did some incredibly difficult things here in 2015 and we have risen to the occasion whether we were students, faculty, staff, administrators, and that there’s much work still to be done,” Shonekan said.

She said she wants people to learn be a better bystander when they see something problematic.

"I really want people to understand the impact of why it’s important to speak out and speak up when you see something happening,” Fults said.

The Department of Black Studies, Gaines-Oldham Black Culture Center and Division of Inclusion, Diversity and  Equity co-sponsored the event.

Student Ethan Phillips said that is problematic in itself.

“Mizzou has to accept what happened. They can’t just be like ‘it happened, let’s move on.’ It shouldn’t be the Black studies department that’s doing this, this should be a whole university-wide thing,” he said.

Fults said, although they've made progress, people need to become more active in the movement.

“Activism isn’t just being there and protesting and marching. It’s also creating policies and being at the table to make change," Fults said. "It’s your existence and being visible in spaces where you’re not always visible all the time."