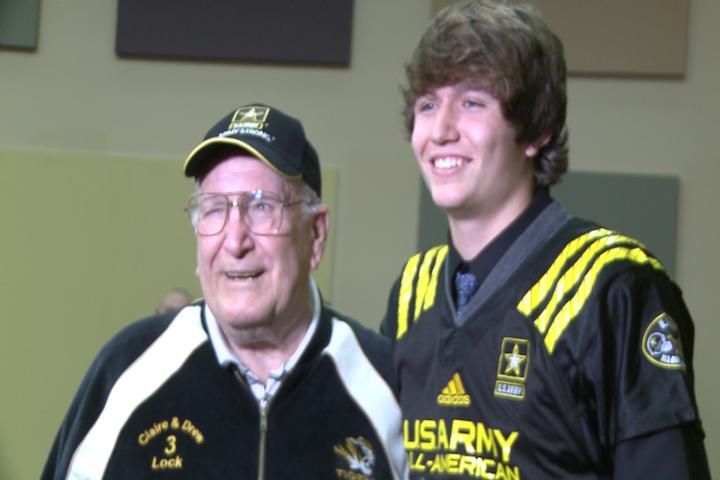 LEE'S SUMMIT - Missouri football commit Drew Lock, a quarterback from Lee's Summit High School, was presented with a jersey on Tuesday for the 2015 U.S. Army All-American Bowl on January 3, 2015.

Lock, the only player from Missouri on this year's All-American Bowl roster, said he's honored to be a part of the game.

"I want to go in there and represent this state well and represent me and my family well, and my school," Lock said. "In the grand scheme of things, it's a true honor. To have U.S. Army on my chest and my back when I play in this game, it's a big deal."

For Lock, it's a bigger deal than you think. His great grandfather, Don Albert, served in the Army from 1951 to 1953 during the Korean War.

"I don't necessarily think it was just a coincidence," Lock said. "I'm kind of struggling to find words here, it means a lot to me, and I know it meant a lot him to be up here. We took a picture together, and he started crying."

"It's terrific," Albert said. "Yeah he's a good kid. He's done all the things the right way so we're mighty proud of him."

Albert has been at every one of Lock's football games, including when Lee's Summit traveled to play Hickman High School this season on Aug. 29.

"He hasn't missed one," Lock said. "It's crazy especially with that age and the things he has going. It's true dedication."

Albert is excited to see his great grandson as a Missouri Tiger next year.

"We just can't wait for him to go to the next step," Albert said. "He'll be at Missouri next year. We'll be there too."