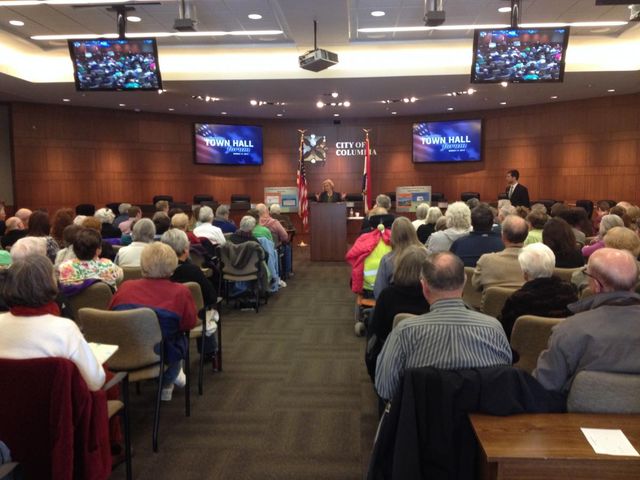 Before the town hall, McCaskill asked the public to write down their questions and put them in a basket. Once the meeting started, McCaskill asked people in the crowd to raise their hand if they would never vote for her. Columbia resident Roger Fries raised his hand first, and McCaskill had him draw the questions out of the basket.

"I want to make sure that people who bother to come to our town hall's know there's no fix," McCaskill said. "I figured the best way to do that is to let somebody in the audience self identify as someone who can't stand me, and let them be the one that pulled the questions out."

Fries said he was happy to be selected but would have preferred to ask McCaskill questions one-on-one.

"I missed the give and take of actually talking to someone and getting their response back, and being able to ask a follow up question perhaps," Fries said.

"University professors and so on can take off during the day to attend something like this, where people that punch the time clock and work an hourly wage can't show up to voice there opinions on it," Fries said.

Fries said his question that he put in the box was not chosen, but a similar one was regarding short term infrastructure.

"If someone is hired to build a bridge, when that bridge is built, their job is done. They have to start looking for a new job," Fries said. "However if a person they went to work for an industry, they'd be working at the same job for the next 5, 10, 15, 20 years."

McCaskill said this country must invest in infrastructure. Missouri ranks in the top 10 for having the most deficient bridges and ranks in the bottom 10 in money spent on roads and bridges.

She added that MoDOT has zero new projects scheduled for this year. The $6 million allocated to MoDOT will all be spent on maintenance.

McCaskill said she and U.S. Senator Roy Blunt are currently working on changing this.

In regards to marijuana, McCaskill said she is actively watching the situation in Colorado, but still does not support it.

"There's been a tourist traffic for getting high, and I'm not sure they anticipated that," McCaskill said. "I think regulation has been more difficult than they thought it would be."

MU President of Students for Sensible Drug Policy Duell Lauderdale was at the town hall. He said he doesn't agree.

"I think people should go there to vacation so that they don't have to be in fear of something they already do here in Columbia," Lauderdale said.

McCaskill will spend the rest of the week hosting town halls in different communities across Missouri.