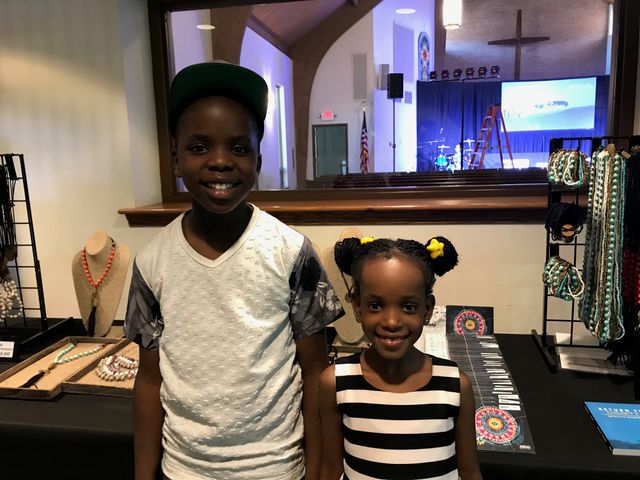 Solomon Mugabi, team leader of the Watoto Children's Choir, said the children are between ages 7 and 13.

“Some of the children we have on the choir were babies when they were abandoned,” he said.

Since Watoto Church founded the choir in 1994 in Uganda, Mugabi said, it has rescued many children from different local communities ravaged by war and fatal diseases like malaria and AIDS.

According to a release from Trinity Presbyterian Church, 18 million children in sub-Saharan Africa have lost their parents to AIDS.

Michael Stanfield, pastor at Trinity Presbyterian Church, said this is the third time his church has partnered with Watoto Church to host the choir.

“These kids are extremely talented," he said. "It’s a great way to be able to experience part of the culture of Africa as well as to support some budding leaders that are coming out of Africa."

He said the children have appreciated the opportunity to bond with the local community, and they will stay with members of his church for the night.

“The best way they end up connecting locally with relationships that are long-lasting are usually from the folks they end up staying with,” Stanfield said.

Joseph Kisa, 11, was abandoned by his parents when he was a baby. He said the fact that he doesn’t remember anything about his biological family doesn’t make him feel alone.

“Music can change people’s lives and tell about all of our stories,” he said.

Kisa started learning how to sing last June and his next goal is to learn how to play drums.

Mugabi said Uganda is a music-loving country and it’s healing its wounds by bringing quality music to the world.

Stanfield said the church expected 200 people to see the choir. He said, while the event was free and open to the public, many have made donations and purchased indigenous crafts and the choir's CDs to support the children.