UM Board of Curators plans for state budget cuts 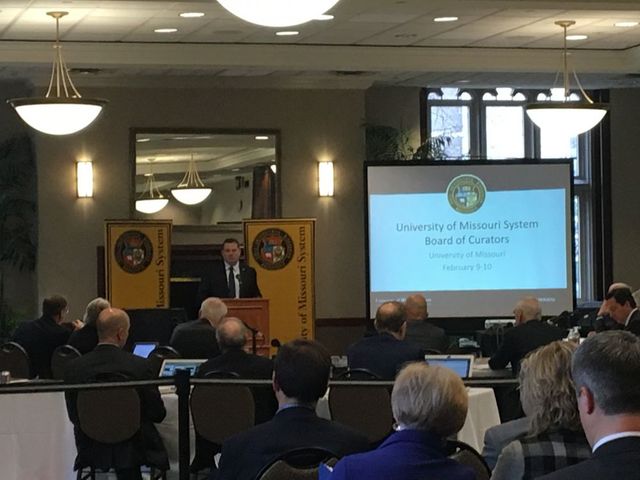 COLUMBIA - The incoming president of the University of Missouri system , Mun Choi, attended his first regular meeting Thursday, which kicked off with an update on the UM system budget.

Choi attended the meeting at the University of Missouri - Columbia after spending Tuesday at the state capital with Gov. Eric Greitens and legislature leadership.

The six present board members and the president-elect met for roll call at 10 a.m before leaving for a private executive session for an hour. The public Board of Curators meeting resumed at 11:10 a.m. with Vice President of Finance Ryan Rapp's presentation on the system budget.

Rapp reviewed how the universities are funded, making distinction between core operations, including state appropriations and tuition, and auxiliary operations, which are self-sustaining. The university cannot determine the use of funds from grants and gifts that come from donors and external agencies, he said.

"Without the roots and trunk of a healthy tree, without a healthy trunk, our financial tree and other funding sources are challenged over the long run and it significantly impacts our mission," Rapp said.

The spokesperson for the University of Missouri System, John Fougere, said this is a challenge for the board, as well as for all public higher education institutions across the state.

"One benefit that we have here is that we have gone through this before, and the University of Missouri System has taken great pains over the years to really be as effective and efficient as possible with our resources," he said. "We are prepared to go forward to address these cuts. It won’t be easy, but we're in a position where we’re able to do that because how how efficient and effective we’ve been in recent years."

Rapp said the University of Missouri system has a history of managing to hold costs down over the past 15 years, and is below the peer average on administrative spending.

"To be specific, we spent 39 percent less on institutional support per student. This represents approximately 80 million dollars in savings," Rapp said, comparing the UM system to the Universities of Colorado, Michigan, Illinois, Arkansas, Nebraska, Minnesota, Tennessee and Texas A&M respectively.

According to Fougere, the UM Board of Curators is working to develop a short term plan and a long term plan in response to the state budget cuts.

"We have informed the campuses in their current fiscal year, we want them to stick to the budget for this year, and to try to raise additional revenue and cut funds where they can," Fougere said.

"What we’ve also told them is if they have gaps in their budget for the current year, they can use some one-time current reserve funds to cover those gaps for now, but after this, we ask that any gaps they have they close those permanently because going forward, some of that funding is funding that we don’t expect to get back."

Rapp said the UM system's strong balance sheet allows for more operating flexibility moving forward, and the board would integrate strategies with recommendations from the UM Review Commission and MDHE Mission Review.

He also pledged the board's commitment to transparency and full communication with faculty, staff and students.

The budget for next year will be set at the UM Board of Curators meeting in April in Rolla.

The Board of Curators meeting will continue into Friday.