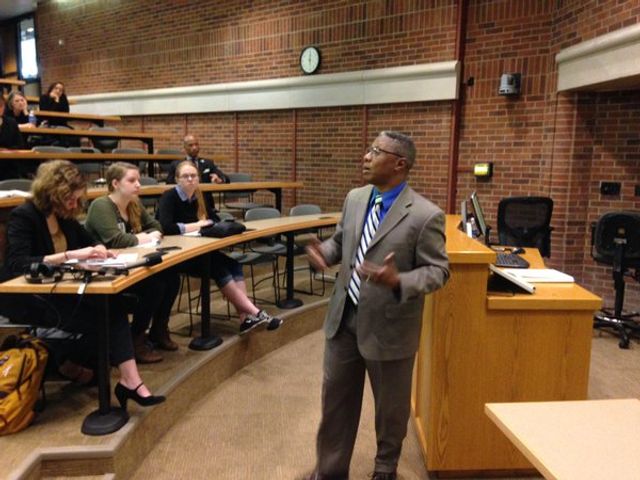 COLUMBIA -Change is coming to the University of Missouri system following November's protests, but it could take some time.

During a presentation at MU's Law School, UM President Michael Middleton said something notable during a pre-recorded video.

"Our number one goal is restoring trust in the UM system," Middleton said.

S. David Mitchell, the chair of the UM Diversity, Equity and Inclusion Task Force, elaborated on that message Thursday night when he spoke to students and faculty in MU's Hulston Hall. Mitchell's talk at MU is the first of four appearances he will make, one at each of the four campuses making up the UM system.

The purpose of the discussion was to update students and faculty on the status of the Task Force. According to Mitchell, they are now in the second of two phases. Phase one consisted of creating the Task Force, and Phase two consists of expanding it by drawing in students and faculty from all four campuses to participate, specifically inviting people who may feel they have marginalized in the past to pitch in.

Mitchell said UM is currently in the process of hiring a consulting firm, which will conduct both qualitative and quantitative research on all four UM campuses. Once this information is obtained, and the task force determines a course of action, Mitchell expects real changes to take place.

Mitchell said he doesn't know how much hiring the consulting firm will cost. The task force's chair emphasized people should be patient with this process.

"Listen, 175 years doesn't change in three months... but no one wants to stand still."

Mitchell said, whether you agree with what transpired on MU's campus this past fall or not, the university has a responsibility to make campus more inclusive.

"The whole state, nation and world is looking at us."