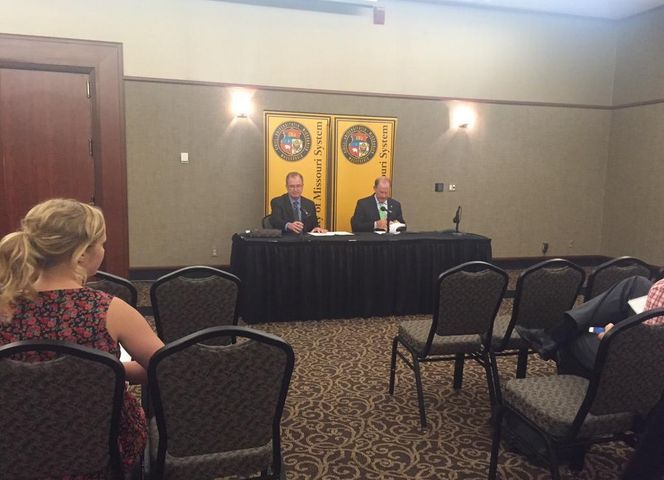 COLUMBIA - UM System President Tim Wolfe voiced his approval of the Missouri Promise at a UM Board of Curator news conference Friday.

The board met Thursday and Friday to discuss budgets, growth objectives across the four campuses, and closed the meetings with the discussion on the Missouri Promise.

"If you look at, for example, a year ago, of the approximately 28,000 Missouri high school seniors graduating in the state who had a 3.0 or better, about 40 to 45 percent don't end up going to college in the state of Missouri. That's a huge missed opportunity for the state," UM system spokesperson John Fougere said.

Fougere said the purpose of the Missouri Promise is to find a way to get high-achieving Missouri seniors to attend colleges or universities in state. He said keeping the students in state is beneficial for Missouri's future economy.

"Funding would have to come from a source similar to something like a tobacco tax increase, which is one thing that has been looked at," Fougere said.

Georgia has a similar program called Georgia Hope, and funding for it comes from the Georgia Lottery.

Also at Friday's news conference, Wolfe said the UM Curators highlighted some system achievements over the past year.

"We also made considerable progress in attracting resources from the state from capital financing for maintenance and repair of almost one hundred million dollars of new buildings which are called 50/50 projects where we raised half that money and the state matched that half," Wolfe said.

He said the combination of the new buildings and the maintenance and repair on existing buildings is about 500,000 square feet.