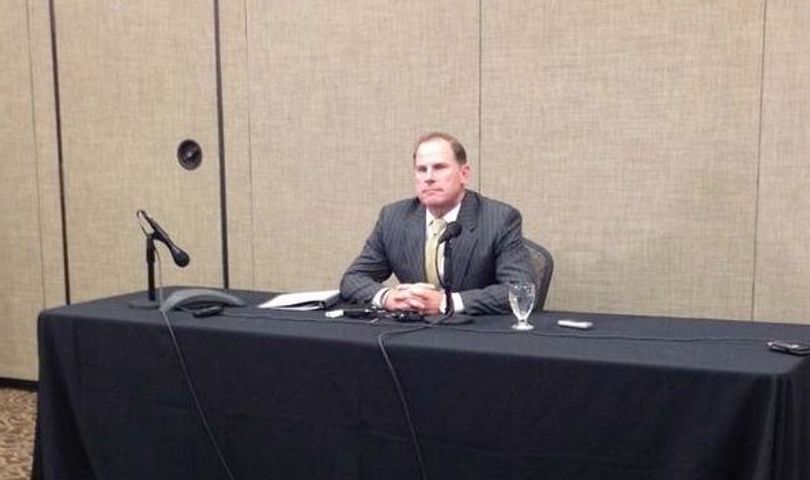 COLUMBIA - For the first time since ESPN's "Outside the Lines" report on the alleged rape involving Missouri swimmer Sasha Menu Courey was released on Friday, a University of Missouri official spoke publicly to the news media to address questions. UM System President Tim Wolfe addressed the media Wednesday regarding the ongoing investigation.

"What I feel as a parent is that one of our students is dead. I don't want to feel that anymore," Wolfe said. "Our goal is to help the Sasha's of the world with mental health services so that this situation doesn't happen again," he said. Wolfe continued, "I can't think of a higher priority for me or UM System campuses." Wolfe said, "Mental health is systemic problem and we have to step up as leaders across our four campuses. It's a never-ending journey."

Wolfe said he believes people can learn from the situation and wants to look at everything related to the incident. He hopes the investigation can help improve things not just on Mizzou's campus but on all four campuses in the UM System.

"We want to be able to provide the right resources in the right way at the right time," said Wolfe. "We look at all policies and procedures on an annual basis as a way to improve the overall process."

Although it was Wolfe's first time addressing the media face to face, he released a message to the public on Sunday. In his message, he stated he would be asking the board of curators to hire outside counsel to conduct an investigation into how MU handled the matter involving Menu Courey. Wolfe also pledged to make additional resources available, including UM System funding, to help with mental health and sexual assault services.

On Wednesday, he addressed the message he released.

Wolfe said he expected the board of curators to make some sort of recommendation on paper Wednesday.

On Monday ESPN re-aired the "Outside the Lines" piece and provided an update from Menu Courey's parents on the developments on the case, stating her parents were happy with Wolfe's decision to launch an independent investigation.

When Wolfe was asked about the reporting of sexual assaults on campus, he responded with: "Are we reporting enough? That's a great question because I don't know...we have to understand the privacy laws, such as HIPPA that protect patient information, as we thoughtfully look into what we need to do."

The Columbia Police Department is now working on the case after receiving information that the 2010 alleged sexual assault may have occurred in the 600 block of Huntridge Drive. The information was given to CPD from the MU Police Department because the location in question is outside MU's jurisdiction.

MU Responds to ESPN Outside the Lines Story