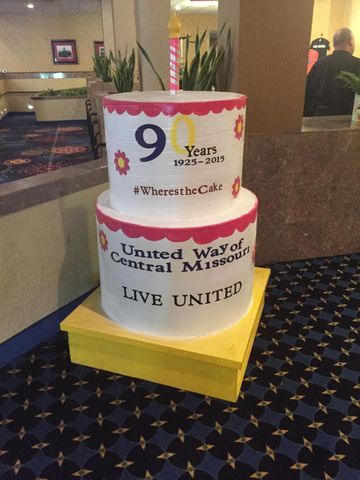 United Way is the largest privately funded non-profit. For the 2015 annual campaign, United Way of Central Missouri has set a goal to raise $1.8 million.

Board Chairman Greg Gaffke said United Way work each day to improve the lives of others.

"Without the efforts of such generous people, these agencies wouldn't exist," said Gaffke.

Stephanie Johnson, the Executive Director of the Boys & Girls Club in Jefferson City, said they are fortunate to receive $75,000 per year from the United Way of Central Missouri.

The Boys & Girls Club provides services at no cost to children in the community, such as those who are on free or reduced lunch at school. The services aim to promote and enhance the development of boys and girls who may not be as privileged.

"We are able to provide these services to children in need because of United Way and our generous community donors," said Johnson.

Last year, Boys & Girls Club served 765 children. She said 716 of those children were able to attend at no cost thanks to both United Way and donors.

Gaffke said pacesetters contribute to almost 50 percent of the money raised each year. Pacesetters are leading companies in Jefferson City that continually go out and raise money prior to the overall campaign.

"They set the pace for campaigning," said Gaffke.

The rest of the money is raised through donations and different events around the community.

Some of those events include profit shares at local restaurants, local shops, and various other events. A full list of these events will be posted on www.unitedwaycemo.org.

Gaffke says he feels very confident this years goal will be accomplished.

"I can't say enough about the people of central Missouri and how generous they are to this," said Gaffke.