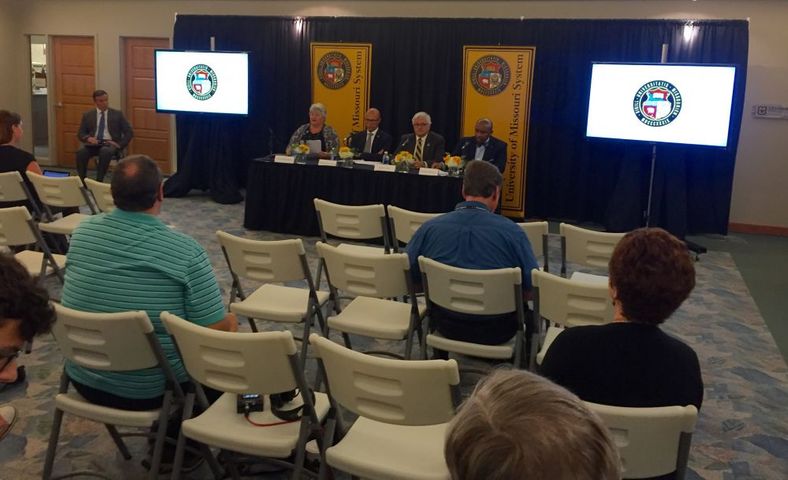 COLUMBIA - Leaders from the University of Missouri system gathered to update the public since the Concerned Student 1950 (CS 1950) protests 10 months ago. They touched on a variety of initiatives, ranging from diversity to student recruitment.

“The University of Missouri system is resilient,” Interim President Michael Middleton said. “Challenges motivate us to remain steadfast and address our issues head-on, with everyone at the table.”

Kevin McDonald, Chief Diversity Officer for the UM System and Interim Vice Chancellor for Inclusion, Diversity and Equity at MU, unveiled the allocation of funds to encourage the recruitment of more minority faculty members. The university added $600,000 to the Faculty Incentive and Excellence Fund. An additional $1.3 million will be used to recruit minority staff. McDonald also announced an MU goal to double the percentage of minority faculty members in the next four years to around 13 percent.

“The students will be able to see themselves represented in the faculty that are teaching them,” McDonald said. “We want them to be able to be able to grasp information and be prepared for this global marketplace. I think there’s a level of encouragement that can really impact learning outcomes in students when they see faculty that look like them.”

One of Concerned Student 1950's demands last year was to increase black faculty members to 10 percent by the 2017-2018 school year. While University leaders did not specifically address the list of demands made by CS1950 last year, McDonald said he has coordinated his efforts with one of the original group members.

Maxwell Little is one of the founding members of the organization. He said hiring is just the beginning.

"Hiring them is the first step, but the overall goal is to make sure new hires are comfortable in their role and comfortable in the community, on and off campus," he said. "The new hiring will resemble the student body. As higher education institutions across the nation become more diverse, so should faculty, staff, and executive leadership."

Diversity, inclusion and equity training is already a required part of faculty and staff training. It was also added to freshmen and transfer orientations. McDonald said two minority counselors were hired by the MU Counseling Center. This was sought by CS1950. A system-wide diversity audit is underway, and the website estimates it will be completed by December.

Little said the hiring of the counselors is a tremendous first step.

"To see the counseling center actually meet some of the initiatives that we had, and the demands, particularly number seven, just shows you that there's hope," Little said. "A lot of students lost hope last semester and last fall."

The current program coordinator for the Lincoln University of Missouri said Concerned Student 1950 is still active in the community.

"[We are] creating our partnerships and relationships with administrators on campus who are looking forward to working with the students," Little said.

The goal of shared governance still remains for the group. Little said this would allow the group to be heard by campus leaders when making decisions.

Hank Foley, the interim chancellor at the University of Missouri, addressed the drop in student enrollment this school year. He said the university is making adjustments to try and recruit more students.

"For those who did leave, we're working hard to gain your trust," Foley said. “There’s no magic solution. You either have to get smaller when you don’t have as much money, which we’ve done that, or you have to borrow from yourself and we’ve done some of that as well.”

He attributed the drop to several factors including universities in neighboring states lowering admission requirements, a smaller high school graduating class and reaction to the events on campus last year.