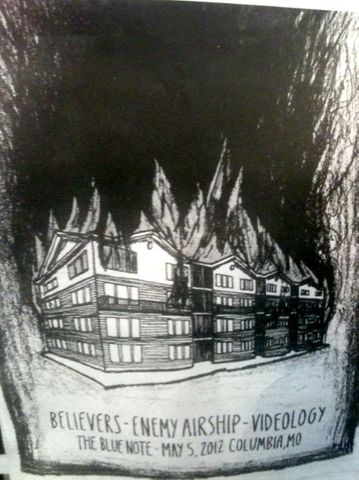 COLUMBIA - A promotional flyer for a local live music show caught a lot of heat after the recent Brookside Apartment fire. KOMU 8 received a flyer featuring a local artist named Ben Chlapek's rendering of what looked like the Brookside Apartment complex in flames. The flyer showcased a May 5th performance at The Blue Note that took place just more than 3 weeks before the fire. Columbia Fire Department Battalion Chief James Weaver confirmed the flyer is part of the ongoing investigation into the fire's cause.

Josh Oxenhandler represents Chlapek, who is a member of one of the bands who performed, Enemy Airship. Oxenhandler believes the image has no connection to the fire, calling the timing an "unfortunate coincidence". He released this statement on Chlapek's behalf to KOMU 8.

"As a resident of the downtown neighborhood, I am terribly saddened to hear about the fire at Brookside apartments. The poster I created is, in hindsight, an irony and coincidence which I cannot erase. Out of respect for the owners of the property and the future residents of the complex, I have taken the image off of the internet and will no longer display it in any form," Ben Chlapek wrote in the statement.

KOMU 8 talked with Daryle Bascom of Videology, who is also the director of Facilities & Events at University of Missouri Athletic Department. He said he hadn't seen the flyer. He said he knew there were two different fliers for the show, but he actually criticized the Blue Note for not publicizing the show enough.

Richard King, owner of The Blue Note, said he personally believes that none of his contracted artists were involved in the fire.

Columbia Responds in the Aftermath of Brookside Fire