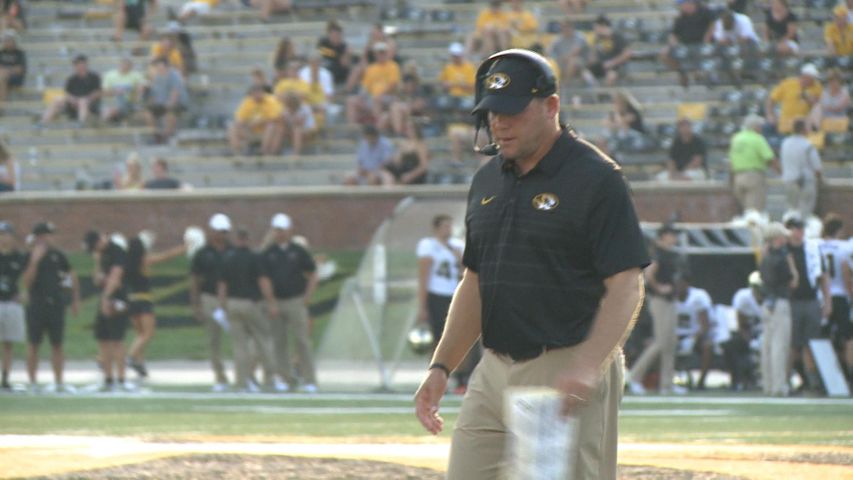 COLUMBIA - The MU Board of Curators voted unanimously for a contract extension and a pay raise for head football coach Barry Odom.

Odom's contract was extended until 2024 with an annual salary of $3.05 million dollars.

According to USA Today and the NCAA, Odom's former salary ranked number 56 out of 130 salaries for college football coaches in 2018. He was the lowest paid coach in the SEC.

Odom has a record of 19-18 in his third season as Tiger coach. He has led the team to back-to-back winning seasons and bowl appearances these last two seasons.

He signed a five-year contract through 2020 when he took over as head coach after the 2015 season.

Charles Harris was a defensive linebacker at Missouri from 2014-2016. He now plays defensive end for the Miami Dolphins. He said Barry Odom has earned his stripes, "without a doubt."

"He came in with a different approach that wasn't received well initially, but the great thing about being a coach is you're the only one that has to be a light at the end of the tunnel," Harris said. "Everyone thought he didn't know what he was doing but it worked out. In a dark room, you only need one light bulb to outshine the darkness," he said.

He said although Odom doesn't have a lot of experience, everybody has to start somewhere.

Another former player who believes Odom deserves to be at MU long-term is Lorenzo Williams.

Williams played defensive lineman at Missouri from 2003 to 2007. He is now the head coach at Westmoore High School in Moore, Oklahoma.

"I mean I guess he had to come in and prove himself before they gave him a raise but if you want to say that, that's fine, but obviously the guy's proved himself and we need to make sure we get him taken care of," Williams said.

He said Odom being a younger age than other coaches and having his own experience playing allows the players to have a connection with Odom, especially when it comes time to overcome a hurdle like MU's loss against Kentucky.

"Another reason why you see a coach like Coach Odom rallying the guys around that situation is like "Hey, that happened to us and it's over with and we gotta park it and redial, refocus and get to the next thing", and I think he did a great job in having those guys finish great at the end of the year," Williams said.

"Those guys wouldn't put their careers in his hands if they didn't believe in him and trust in him and want to come there and be great with him," he said.

Odom played linebacker at Missouri from 1996 through 1999, and still ranks among the school's top 10 all-time leading tacklers.

"The biggest part of your job is bringing in good players. Him being able to bring in two secure players like that is only going to bring more notoriety to the program, the more notoreity to Mizzou and that I think he's a driving force right now and you gotta take care of that guy," Williams said.