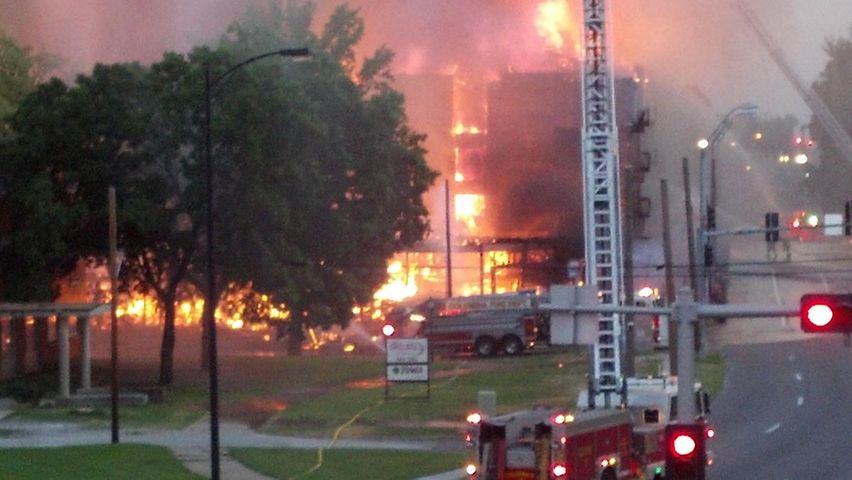 COLUMBIA - Jeff Larson awoke Sunday morning to learn he may no longer have a place to live this fall.

"I just can't believe it," Larson said. "It looks like it's just completely gone."

Larson, set to move in to the Brookside on College apartments in mid-August, said he has "no idea" how he will proceed with living arrangements now that an early morning fire ravaged the complex just after 5 a.m. Sunday. Capt. John Metz of the Columbia Fire Department said investigators do not yet know the cause of the fire, which was so large it required every single unit in the department to tame.

"The fire was so intense our first arriving companies had to stage back approximately a block in order to avoid the radiant heat," Metz said. "It's fairly rare in the city of Columbia to get a second, let alone third alarm fire."

As Larson watched his future home burn around 9 a.m. Sunday morning, he said he hoped Brookside would help pick up the costs for leasees. According to an email received by residents, management said it was "hopeful that some units may be ready for occupancy sooner than others" and said "it appears" temporary housing for all residents in the fall would be available. The email also claimed management had met with Stephens College to discuss these arrangements.

KOMU 8 News attempted to contact both Brookside on College and Stephens College, but neither were immediately available Sunday morning.

T.J. Gibson, the owner of Mid-State Contractors, arrived at the scene of the fire Sunday morning as well with a few employees to assess the damage. Gibson said his company had at least $100,000 invested in the Brookside on College project and had 60 percent of its work completed before the fire.

Since joining the construction business in 1998, Gibson said he'd never seen a situation like this before with one of his developments.

"We're just trying to figure it all out and wrap our mind around it," Gibson said. "I don't even know where to start."