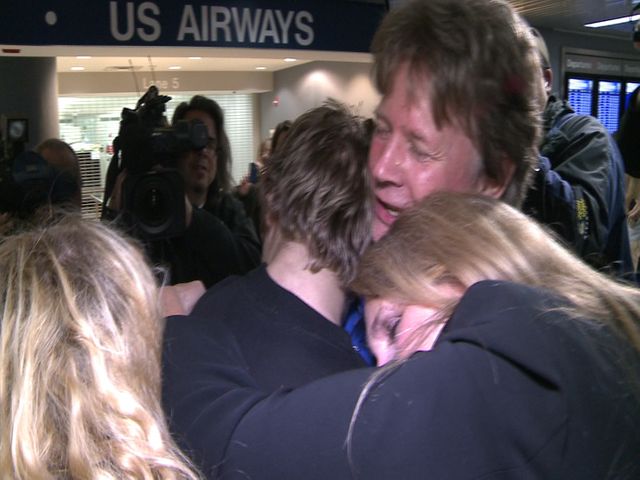 ST. LOUIS - Derrik Sweeney arrived in St. Louis just before midnight Saturday, after being released from police custody in Cairo.

Family and friends greeted Sweeney with signs, banners and hugs to welcome him back to the United States. Sweeney spoke to the press for several minutes after landing in St. Louis. Contrary to several reports, Sweeney said he and his two American friends were not on a roof top and did not throw anything before being taken into custody.  Once in custody, Sweeney said authorities hit him and the two other Americans, and threatened to shoot them if they moved.

"It was the scariest moment of my life," said Sweeney.

Sweeney said he holds no grudges against Egypt, and truly believes the Egyptian people are good people. He eventually hopes to return to Egypt.

The Sweeney family had a momentary scare Saturday night, when Derrik almost missed his flight. Sweeney was 15 minutes away, stuck in Customs when his flight was scheduled to leave. His parents, Joy and Kevin Sweeney, desperately persuaded the airline to delay the flight. Joy Sweeney said her son called her thinking he had missed his flight.

"He was almost in tears, but I told  him 'they're holding the plane, run to the gate!'," said Sweeney.

Derrik Sweeney said he looks forward to "watching the Packers win the Super Bowl again, and eating some turkey."