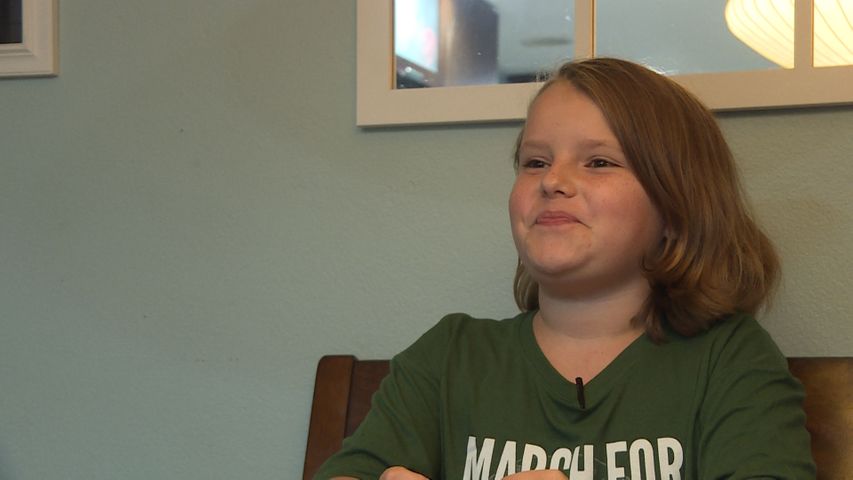 COLUMBIA –Around 100 people attended March for Our Earth, a climate march led by a nine-year-old.

Fourth-grader Emma Winter is leading a climate march Sunday afternoon that she created to raise awareness of  “everyone’s responsibility” at all ages to take care of Earth.

70-year-old Mark Haim, who is the director of Mid-Missouri Peaceworks, usually organizes protest for peace and the planet. This time he was on the sidelines as a spectator.

He said he's proud younger people have stepped up.

“Everyone has a job here. You can’t call on someone and say, 'make this change for me.' You have to be a part in it too,” Emma said. “As kids, people think they can’t do this yet, but I’m here. I’m nine, and I’m doing a march.”

March for Our Earth is a one-hour event at the Boone County Courthouse plaza that will feature speeches by children and city activists, performances by local musicians, a performance by a special children’s choir and a march downtown.

Emma first thought of the idea for a march after the Jefferson City tornado in May.

“I was upset with the changing weather patterns,” Emma said. “We need to make change now because eventually we won’t have another Earth to live on.”

Her parents were initially skeptical. Emma’s mom, Ginny Ramseyer Winter, said it wasn’t until August that they realized Emma was “adamant” about seeing the march through and raising awareness. The same month, the Winter family met with city officials on confirming details of the march, and after, it was in full swing.

Emma reached out to local musicians Violet and the Undercurrents to entertain. She invited people like the coordinator of Columbia’s Earth Day festival, Laura Wacker, and two Columbia youth to speak alongside her.

“The two main elements I wanted is having speakers and actually marching,” Emma said. “When you combine those two, it makes what I call a ‘perfect march.’”

Violet and the Undercurrents set up a children’s choir of young climate activists for the closing song of the march.

“Turning off lights, making eco-friendly laundry detergent,” Emma said. “Every single person in the world can make a change.”

For more information on March for Our Earth, visit its Facebook page.