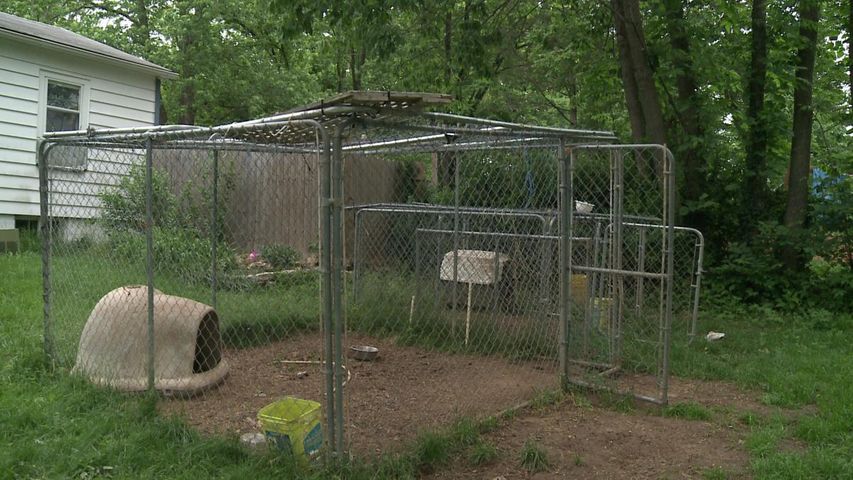 FULTON - Fulton Police shot a pitbull Thursday during a drug raid that ended with an arrest for possession of marijuana.

Officers arrived at 217 S. Ravine St. at 5:30 a.m. with a search warrant for narcotics.  The officers first handcuffed Clifton Ivory and the other residents of the house, and then became aware Ivory's pet pitbull. The police released one resident of the house to take control and lock up the dog.  The resident wanted to lock the dog up in its kennel in the basement, but police wanted the dog outside.

The released resident chained the pitbull to a tree.  The dog eventually escaped from chain and then was shot at by police officers.  Neighbor Michael Dunavant said he was awakened by what sounded like to him a little girl screaming and two gun shots.  Dunavant then proceeded to go outside and saw the dog laying on the ground.  He saw two different police officers take two more shots each at the dog.  "It looked like they were just taking pot shots at the dog," Dunavant said.

The pitbull then ran around the house to the back porch of the house.  Dunavant said then an officer shot the dog two more times, this time with a shotgun at point blank range.

Clifton Ivory also owns two pitbulls puppies that were locked up outside in cages at the time.  One puppy escaped from its cage during the excitement, and Dunavant said a police officer maced the other puppy which was still in its cage.  He then saw two police officers approach the two puppies with shotguns and he yelled, "Are you really going to shoot those puppies while I'm watching."  He said the officers pulled back and then said he had to go inside his house or he and his girlfriend would be arrested. The two puppies were taken by police, and neighbor Cynthia Snook said the dogs must be euthanized due to a city ordinance.

Other neighbors spoke of the dog's friendliness and non-aggressive behavior. "That's a good dog, I've seen her a lot. She gets off her chain a lot. When we're out here, she comes and sniffs my little girl's hand. I let my daughter pet her. There was no need for that," said neighbor Marie Dishman.

Fulton's Chief of Detectives Andre Cook defended the officer's actions. "If there is an animal that is aggressive that cannot be contained, we do whatever we have to do to protect ourselves and others,"  Cook said.

Fulton's Mayor Leroy Benton said an investigation into the officer's actions is a possibility.

The Fulton Police took Clifton Ivory's baby pitbulls to the station and arrested Ivory for a possession charge of marijuana. Ivory has been released from jail.