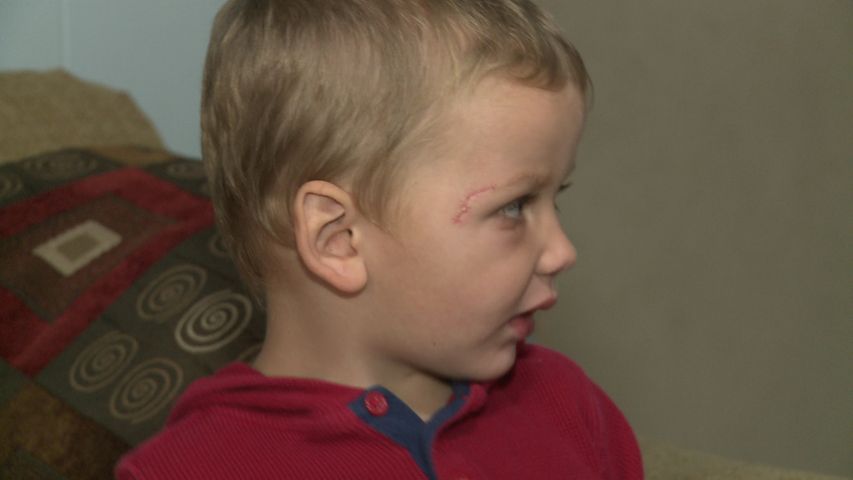 HOWARD COUNTY - Kain Studley continued to recover Wednesday morning from dog bites received in an attack Oct. 12. The three-year-old suffered a broken eye socket after a neighbor's dog bit his face twice. After a 10-day observation period ended Oct. 22, Howard County Veterinary Service determined that the white German shepherd did not have rabies. Because of this, Kain will not need two additional rabies shots.

Under statute 578.024 of Missouri Revised Statutes, the Howard County Sheriff's Department charged the dog's owner, Tamara Huffman, with a Class A misdemeanor. Huffman faces criminal charges after her dog severely injured Kain and killed another neighbor's pet. The sheriff's department must prove two attacks by the same dog for a prosecutor to file criminal charges against a dog's owners. The sheriff's department also proved that Huffman's dog attacked Rodney Lee's miniature pinscher in the past.

Lee filed the report on Oct. 20. It contained information about the German shepherd's attack against his small dog. Lee said he "tried to take a gun" when passing Huffman's residence. "I wasn't sure if the dog was going to attack."

The Howard County prosecutor filed misdemeanor charges against Huffman because her dog attacked a person and an animal. Under these regulations, dog owners will face felony charges in the event that their dogs attack two or more people.

According to veterinarian R.F Taylor, Howard County Veterinary Service destroyed Huffman's dog on Oct. 26. The statute requires a dog be destroyed after a subsequent attack resulting in "death or serious injury" to a human. Huffman volunteered to destroy the dog.

Jennifer Mathews, Kain's aunt, is angry that a dog must be responsible for two attacks before its owners see criminal charges. "The law needs to protect the neighborhood, the animals, the kids, the livestock... not geared toward protecting the dog," Mathews said.

The city of Fulton dealt with a dog attack against a postal worker in early March. In this case, a veterinarian destroyed both pit bulls involved in the attack. Based on Fulton's municipal code, "Any animal involved in a fatal attack on a human being or attack that results in severe injury to a human being, whether provoked or unprovoked, shall be confiscated." The animal will then be "humanely euthanized." Officials will return it if the owner shows "good reason" that the animal should not be destroyed to the municipal court judge. This applies to the first attack by a dog.

Les Hudson, Fulton planning and protective services director, said that Fulton referred to its municipal code in the decision to destroy the dogs. Hudson said that the city follows this code when its regulations are "more stringent" than state statutes. "It's the first I've heard of dogs [being responsible for] two attacks and not being put down," Hudson said.

"I think we responded to the best of our ability with the situation we had," Howard County Sheriff Charlie Polson said. Polson said there is no indication that Howard County will adopt a new dog ordinance to take action against a dog's first attack.