UPDATE: One Dead, 33 Injured in Megabus Crash with Columbia-Bound Passengers 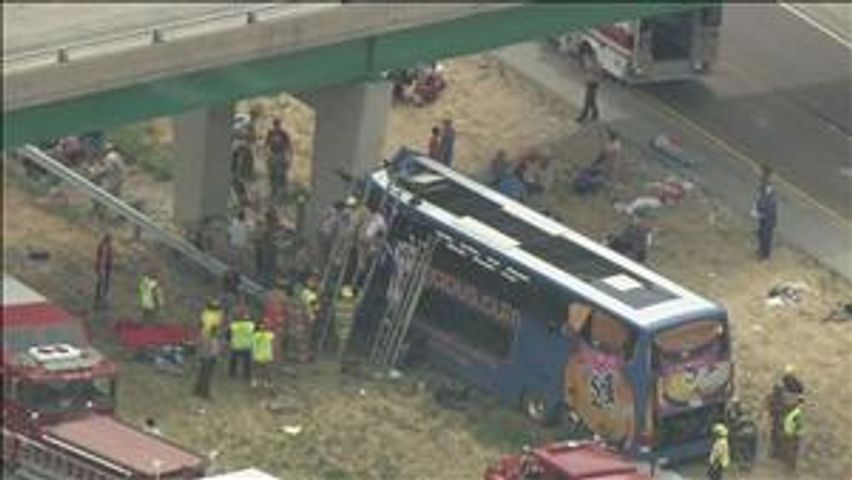 LITCHFIELD, Il. - Authorities have confirmed that at least one person died Thursday afternoon when a Megabus bound from Chicago to Kansas City crashed on I-55 north of St. Louis. The bus is reported to have had 64 people aboard.

33 people were injured and transported to local area hospitals. Several are listed in critical condition. 5 of the passengers were airlifted.

Those uninjured were transported on a school bus to a safe location.

There is no word yet on the identity of the victim killed in the accident.

The bus ran into a bridge abutment in the center median of the interstate, closing lanes in both directions. Rescue crews worked to free victims from the wreckage. 30 ambulances, 5 helicopters, and 7 fire departments were dispatched to the site from Montgomery, Macoupin, Sangomon, Christan, and Madison counties.

It is not known how many Columbia-bound passengers there were or if any of them are among the dead or injured.

The Columbia stop was scheduled to take place at 4:35 p.m. Megabus did tell KOMU 8 News it is sending a replacement bus to continue the route through Columbia to Kansas City.

Jacob Hoopes, a passenger that was supposed to be on the Kansas City leg of that route, said Megabus told him a replacement bus was scheduled to arrive in Columbia at around 7:15 p.m.