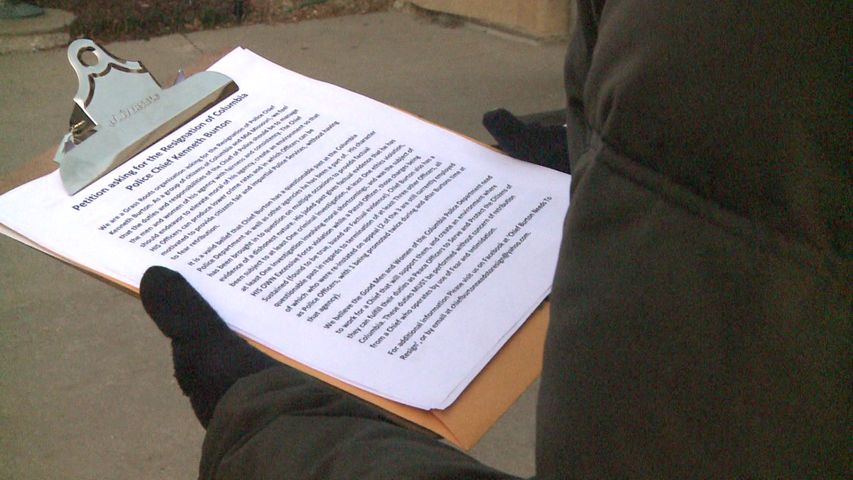 COLUMBIA - The group that calls itself "Chief Burton Needs to Resign" said Monday it has gotten over 200 signatures in support of ousting the chief of Columbia's police department, Ken Burton. The group said last week was its first week of petitioning. Saturday morning, three group members petitioned in front of the Columbia post office, marking the first time the group petitioned in public.

Meanwhile, local civil liberties group Keep Columbia Free is circulating an on-line petition in support of Burton.  Keep Columbia Free President Mark Flakne said the petition had gotten about 80 signatures since introducing it Saturday night.  Introducing the petition on the same day the group asking for the chief's resignation went public was important, Flakne said, to show how large of a support base the chief and his decisions has.

Both movements come after Chief Burton fired Officer Rob Sanders on Sept. 21 for use of excessive force after video showed Sanders went into a holding cell and forced a suspect to the ground. The incident occurred August 15. Sanders was then placed on administrative leave on August 24.

Internal affairs cleared Sanders of the incident after an investigation.  According to the report following the investigation, there was not enough evidence to show Sanders used excessive force or violated police policy. However, Burton said Sanders did not act within policy and fired him despite the findings of the investigation.

Flakne said he and other members of Keep Columbia Free have not always agreed with Burton in the past, but believe firing Sanders was the right thing to do.

Amy Sanders, the fired officer's wife and member of the group asking for Burton's resignation, said Burton does not treat the Columbia police officers with fairness and consistency. She said the ultimate goal of the group is to get the police department back on track.

On Sunday, members of "Chief Burton Needs to Resign" began circulating an on-line petition as well. Both groups plan on presenting their petitions and signatures to the city council and manager next month.

Deputy City Manager Tony St. Romaine said the only person who could fire Burton is City Manager Mike Matthes.  Romaine said he cannot recall any cases in Columbia where a petition swayed the city manager's view in one direction or another on an issue.