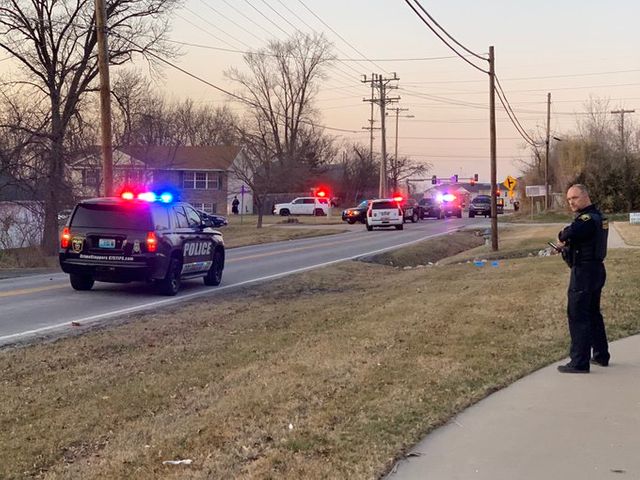 COLUMBIA - Police identified the man who died during an officer -involved shooting and standoff Thursday night.

Chief Geoff Jones said Curtis Haas was found dead after law enforcement entered the home on Sun Court in which he had barricaded himself.

The incident happened near Grindstone and Rock Quarry road just after 6 p.m.

In the briefing, Jones said the Missouri State Highway Patrol asked CPD for help arresting Haas on a prior charge. During the arrest attempt, Haas reportedly tried to drive away, and when that didn't work, he retreated into his own home.

Two KOMU 8 reporters on scene heard about a dozen gunshots while on the scene, and almost 20 officers responded.

Before entering the home, police say the suspect barricaded himself inside the home.

Police closed Rock Quarry south of Grindstone and north of Nifong and Grindstone between Grindstone Plaza and Bearfield for several hours during the incident.

When KOMU 8 first arrived on scene, officers in SWAT gear were moving closer to the house and preparing to breach. A robot was deployed in front of the house.

According to the suspect's family members, there were weapons in the house, which Jones confirmed at Friday's briefing. Jones suggested it appeared Haas had been prepared for a possible confrontation with police.

Sapp said the police had a personal protection vehicle, a crisis negotiation team, a drone and a robot to "deescalate the situation."

Police evacuated people in the area; some were still in their cars.

"Always our first priority is to bring this to a peaceful community and that's what we’re working very hard to do right now," Sapp said.

Assistant Chief Brian Richenberger said at some point, there was an exchange of gunfire. Officers secured the surrounding area. Officers evacuated residents and remained on scene. They determined the suspect had died.

"At that point, we notified MSHP and an active investigation is going on as we speak regarding the officer-involved shooting," Richenberger said.

I’m currently close to the corner of S Rock Quarry Rd and Grindstone. Officers say they have a suspect in a house on Sun Ct. @KOMUnews pic.twitter.com/VXarKegF4G

This is the view from the other side of the Pointe apartments. Can’t see the swat vehicles, but can still hear them shouting commands at whoever is in one of the houses down there. @KOMUnews pic.twitter.com/imSjqvClGJ

If you’re trying to travel on Grindstone heading toward 63, we are being rerouted right now. (Over by Break Time) @KOMUnews https://t.co/uRu9tFuoJ8 pic.twitter.com/PdlenaPuPR

The case has been turned over to the Missouri State Highway Patrol to conduct an independent investigation.

This is a developing story. We will provide updates as they become available.