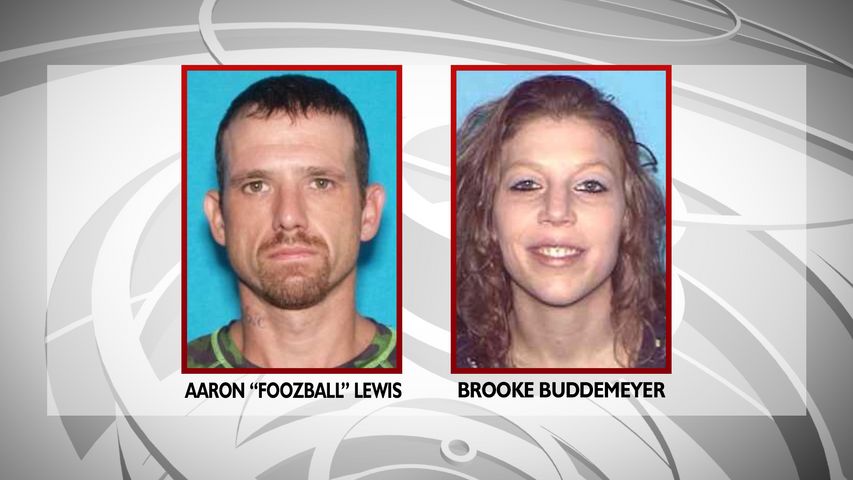 BLAND - Both suspects wanted in connection to a Bland murder were arrested in Madison County, Florida on Thursday.
The Gasconade County Sheriff's Office issued arrest warrants on November 25 for Brooke Buddemeyer, 29, and Aaron "Foozball" Lewis age, 36. They are suspects wanted for the shooting death of 53-year-old Jessie Robbins.
The sheriff's office posted on Facebook on Thursday the two were caught after a vehicle pursuit in Florida. Local charges are expected to be filled after they're extradicted.
One neighbor told KOMU 8 on Nov. 30 Buddemeyer is the step-daughter of the murder victim, Jesse Robbins.
Vernon Lunceford said the neighborhood was very chaotic the day of the murder.
"There was a lot of hollering going on and later the sheriff's department was over there," he said.
Lunceford talked about Robbins being a very friendly and helpful person in the neighborhood.
"Ol Jesse. He helped us aroud the house. He worked on the house with us and everything. Real nice guy as far as I'm concerned," he said.
When thinking more about Robbins, Lunceford realized he was going to miss having Robbins around.
"Not that he'd come and visit all the time, but ol Jesse out there saying 'Hey Vernon how you doing?'," he said.
Buddemeyer is facing second degree murder and armed criminal action charges with a $750,000 bond. Lewis is facing a second degree murder charge with a $500,000 bond.
(Editor's Note: This story is continuing to be updated as more information becomes available.)