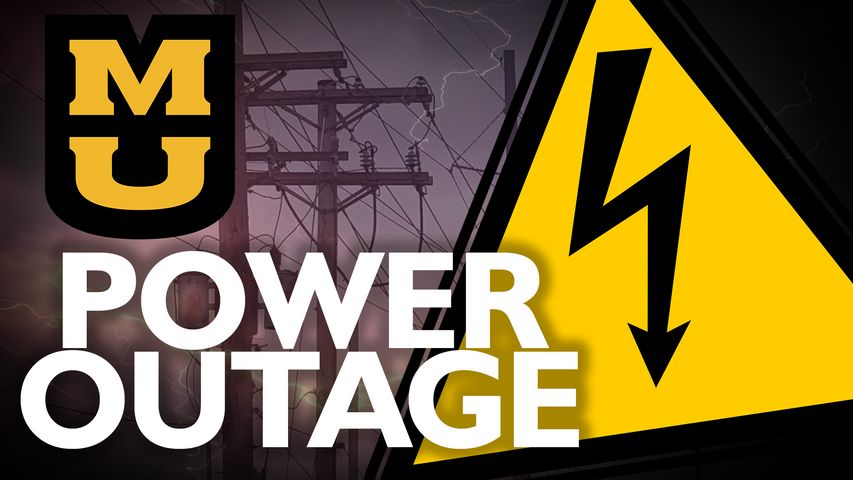 COLUMBIA - Multiple people were trapped in elevators across MU's campus as a result of a widespread power outage Tuesday afternoon.

MU spokeperson Liz McCune said around 15-20 buildings lost power around 4:40 p.m. after a "trip in the line" at the Conley Avenue power substation.

Diedrich said Ellis library was evacuated as a precaution. Witnesses on campus reported other buildings, including the student center and recreation center were also evacuated.

She said no injuries were reported.

Power was restored to most buildings by 6 p.m. Hudson and Gillett Halls remained without power until 9 p.m.

McCune said MU lost power last Wednesday after a turkey vulture severed the campus's power connection with the city. She said maintenance staff believed the timing of Tuesday's outage was a coincidence.

Power has been restored to all buildings! Thank you to our hardworking friends in Campus Facilities!

UPDATE: Power still out for at least two residence halls and a dining facility at MU. Fire alarm strobes were flashing inside a few minutes ago. Columbia Fire and MUPD on scene. @KOMUnews pic.twitter.com/EXL5nTQ9E8

Crews expect repairs to the transformer to take about 3 hours.

Power is still out in Gillett, Hudson and Rollins. Crews are on site working to fix the problem as quickly as possible.

An update on campus power outages. Campus facilities is working to restore power as quickly as possible. Power is restored to most buildings and we’re hoping to have everything restored soon.

Attention members! We are opening back up at 630 p.m. All programming including RecSports, TigerX and Club Sports practices are cancelled for the evening.

The lights just came back on in the Student Center. MU Spokesperson Liz McCune told me the power went out at 4:37 due to a “trip in the line” at the Conley Avenue substation. It affected 15-20 buildings. Multiple people have been rescued from residence hall elevators @KOMUnews pic.twitter.com/DHUQFEfyJk

@MizzouRec power is now back on. We are now waiting to see if the facility will remain closed for the night. @KOMUnews

The @MizzouRec will be closed the rest of the night due to the outage. @KOMUnews pic.twitter.com/JEKdlXgtYa

The tiger tail on top of the student center has deflated due to the power outages on Mizzou’s campus. @KOMUnews pic.twitter.com/DJn6I0ZZrw

The power is out in the MU Student Center, people were asked the building a few minutes ago. I also witnessed people evacuating Ellis Library. @KOMUnews pic.twitter.com/ptBjX7fYC7