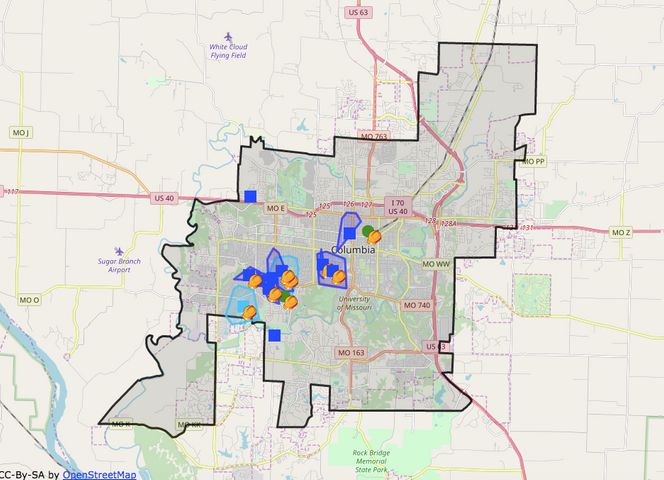 Columbia Water and Light outage map as of early this afternoon.

BOONE COUNTY - Thousands of Boone County residents had their power restored Sunday, after initially being told they might have to wait until Monday or Tuesday for it to be fixed.

According to Columbia Water and Light's outage map, around 100 customers remain powerless Sunday afternoon at 3:00 p.m.

According to a city press release, "The crews are currently working on the larger outages, impacting large amounts of customers, caused by trees and limbs falling into distribution lines. They will then work on restoring power back to individual homes that have had single drop wires impacted by winter weather."

The city requested mutual aid, seeking a "declaration of emergency" Saturday morning. The declaration is whenever the city manager asks for emergency help from others under a mutual aid agreement.

Crews from Waynesville, Macon, Palmyra and Rolla are responding to the city's request, according to a news release. Contractors PAR Electrical and Asplundh are also assisting the city.

Today, PowerOutage.US is reporting that aorund 38,000 customers are without power across the state. Yesterday, the site said that 102,000 homes across Missouri counties were powerless.

KOMU 8 spoke with people who dealt with power outages Friday night. Cheleare Hines was worried about her children.

"We just watched our thermostat just drop and it just kept dropping. Coldest it got in our house was about 60 degrees," Hines said. "It was really unnerving not having any type of power, not having any second source of heat, because our entire house is run off of electric."

Others said they were nervous the power wouldn't come back on for a while.