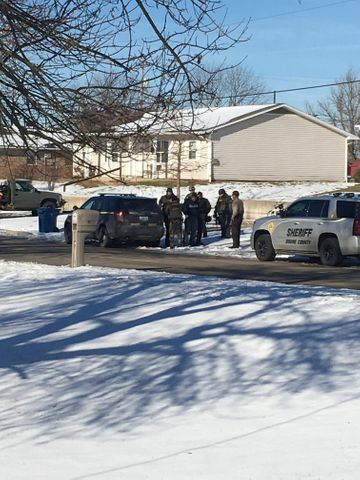 The suspect, Eusebio Daniel Barajas-Real, 29, was taken into custody by Boone County Sheriff's Deputies at 105 E. Liberty Lane in Ashland just after 10:30 a.m. Thursday, according to a press release.

He was arrested on charges of assault in the 2nd degree (special victim), armed criminal action, and property damage 1st degree. No bond has been set for these charges as of 12:30 p.m. Thursday, according to the press release.

He was also arrested for outstanding warrants for failure to appear in court related to traffic and other misdemeanor offenses, according to the release. Bond on these warrants is $8,550.

The incident happened just after 11 p.m. on East Broadway at the Bass Street intersection, according to Ashland Police Department Deputy Chief Terry Toalson.

Toalson told KOMU 8 News the officer was in his car and tried to stop a person who was walking that he recognized as someone with a warrant out for his arrest.

Toalson said the suspect then shot three times at the officer and ran away. The officer was not injured.

That officer and a second officer on duty then attempted to locate the shooter, but were unsuccessful, according to a press release.

Police said the suspect is still at large.

"At this point, we’ve exhausted everything we have in the way of leads, but we’re not going to let this go," Toalson continued. "We’ll continue trying to locate this individual until he’s caught."

Toalson initially described the suspect as a Hispanic male in his 20s, 5'11", 210 pounds with dark hair and brown eyes. A Facebook post said the subject was wearing all black and had a mask on.

Toalson said the warrant was not for any previous violent offenses, but instead for a failure to appear in court after traffic charges.

"(We were) Originally attempting to make contact with him and follow-up on the more serious charges relating to the receiving stolen property and resisting arrest," he said.

At least a dozen law enforcement vehicles responded to the incident near Ashland's City Hall. They responded from the Boone County Sheriff's Department, Columbia Police Department and Missouri State Highway Patrol. CPD also had a K9 unit trying to track the suspect on two scenes. They searched near the East Broadway scene, at times with shields up and long guns out. Investigators also checked a previous residence for the suspect on Liberty Lane.

UPDATE: Ashland PD says suspect is at large after shooting at an officer last night after 11. Officer wasn’t injured. There are two bullet holes in the officer’s car. Suspect had warrants out, but not for any previous violent offenses, per Ashland Dep. Chief. pic.twitter.com/eRMQ5D3Xcq