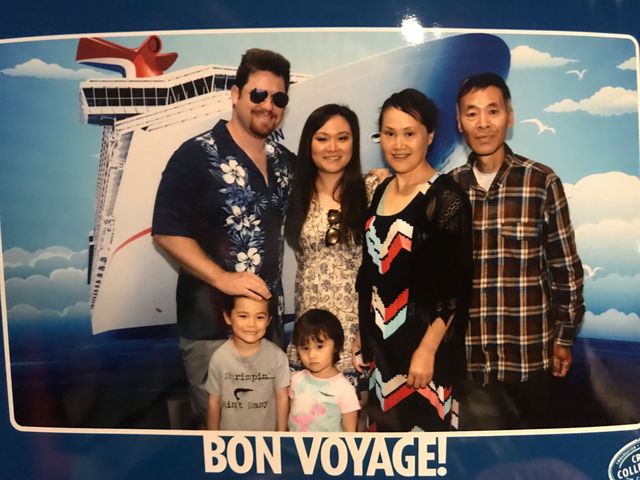 Courtesy of the McDevitt family KAISER - One family says it is facing an immigration nightmare. Jia McDevitt's parents were detained at the Jacksonville, Florida, port after a family cruise in the Bahamas.

KOMU 8's sister station in Jacksonville, WTLV, is reporting that the parents are safe in China.

"We chose the Bahamas because we were told that Chinese citizens and the Bahamas have a mutual agreement where they can go with only a passport, no visa," said her husband, Joe McDevitt.

Jia McDevitt's parents are residents of China, but they have been visiting family in the U.S. Her father has late stage cancer.

"We're really worried about her dad. He's at the end. The only thing he wanted to do was meet his granddaughter," Joe McDevitt said.

Within minutes of getting off the Carnival Cruise boat, Joe McDevitt said, his parents-in-law were detained. The family was told the two would be sent back to China and that Carnival Cruise was footing the bill.

"I one hundred percent feel like Carnival could've prevented this. It's hard to get on an airplane. It's not easy. You have to go through lots of check points, which we did. If there was any reason they couldn't let us return to the U.S., they should not have let us on that boat. I would've gladly lost the money to keep my family in tact," Joe McDevitt said.

The family said U.S. Customs and Border Protection will not give them any information on why the couple is being detained.

A Columbia immigration attorney said there could be a number of reasons.

"If an officer suspects violation of visa or that the immigrant no longer has intent to return to their home country, the officer may detain the person," Stephen Blower said.

Joe McDevitt is an army officer, and he said he believes that fact should prove there is no reason to believe either of those ideas.

"I'm telling you, they came here legally," McDevitt said. "They've been properly vetted. I have a secret security clearance, and my brother does. I'm sure they went through something in relation with me. I am more than sure."

Joe McDevitt said his mother-in-law has come the the U.S. twice before and never overstayed her visa. He said he believes customs agents acted illegally when detaining the couple. He worries they will not be treated well.

Blower said customs officers are not easily challenged and non-resident travelers must be particularly cautious.

"If you aren't a resident, don't take anything you do for granted," Blower said. "Anything that involves a legal process may apply a little differently to you."

"This is the American dream, this is what people want," McDevitt said. "We're over here trying to do the right thing, trying to come in here the correct way."

*Editors note: This story has been updated.