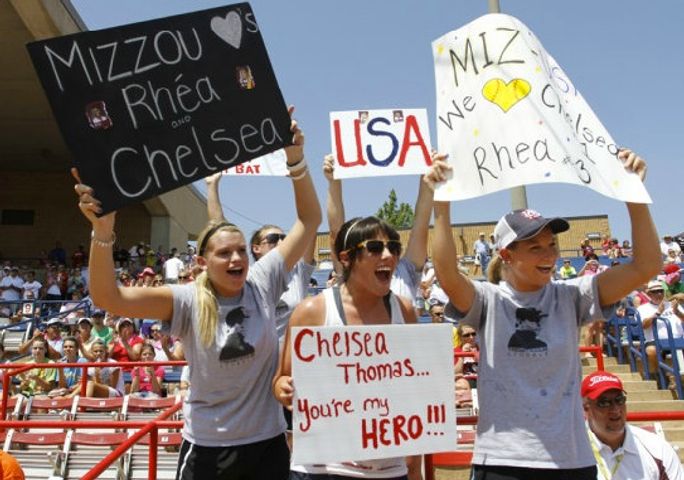 OKLAHOMA CITY, OK - Team USA had to win Sunday's afternoon game in order earn a spot in the championship game of the World Cup of Softball at the ASA Hall of Fame Complex. Things started off slow for both teams, going scoreless for three and a half innings. In the bottom of the fourth Team USA's bats exploded.

Christi Orgeron hit a three run double to put her team on the board 3-0. Then Michelle Moultrie hit a grounder to second base. Great Britain's second baseman Naomi Jones with a delayed throw to home. Orgeron would score and Great Britain would pick up the E-4.

Stacy May-Johnson came to the plate with bases loaded; Lauren Gibson on third, Moultrie on second and Mizzou's Rhea Taylor on first. May-Johnson with the grand slam to give the USA a 8-0 lead still in the bottom of the fourth inning. Valerie Arioto and Brittany Schutte would May-Johnson each hitting solo home runs to give Team USA then 10-0 run ruled win against Great Britain and move into championship play and improve their record to 5-1.

The World Cup of Softball Championship game featuring USA and Japan will be played at 8 p.m. CT on ESPN2.