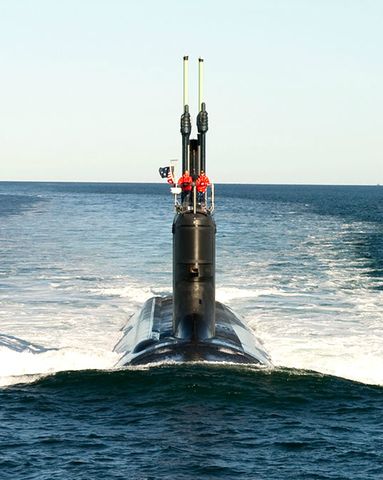 JEFFERSON CITY - The captain of the USS Missouri submarine made a special visit to mid-Missouri on Friday.

Captain Michael Luckett came with two of the 130 crew members that work aboard USS Missouri.

The crew spent some time at the University of Missouri, as well as in the capital.

"On Wednesday we went to Columbia to meet with the University of Missouri ROTC Unit, Naval ROTC Unit," Luckett said.

Along with this meeting, Luckett toured the Missouri State Penetentary, met with Governor Nixon, and spent special time in Joplin.

Luckett said the most important visit from his week in Missouri was this time he spent in Joplin.

When Joplin was hit by the tornado, a group of the USS Missouri crew members spent their vacation time volunteering in Joplin to help rebuild the city.  Luckett explain that the sailors that spent their time rebuilding the city have since shared their stories with the other crew members.  He said their stories have become a kind of "legend" on the ship.  Those stories help cement the idea about what it really means to have a relationship with the people of the state of Missouri.

Luckett is excited about what the upcoming weekend has in store.  It is a big game for the Missouri Tigers, and Luckett will attend the game before he heads back to Kansas City and then Connecticut where the submarine is stationed.