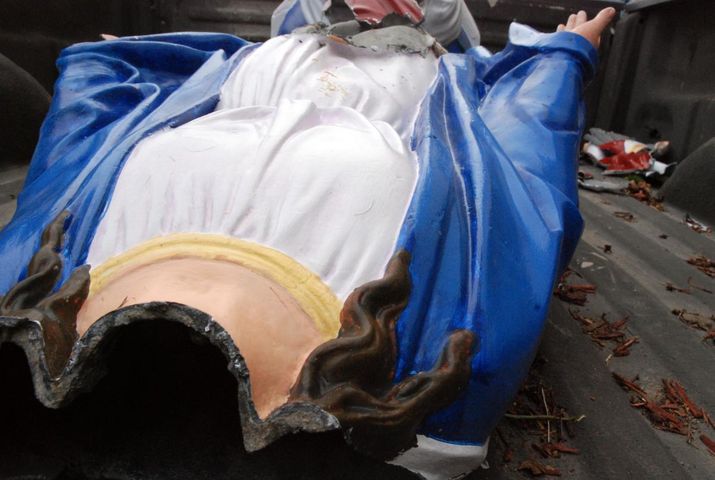 JEFFERSON CITY - The statue of Mary is no longer sitting peacefully in front of Helias Catholic High School. Jefferson City Police believe vandals pushed the statue off its pedestal Tuesday night. The statue's head is broke off along and the baby Jesus shattered to pieces.

"I think it's a shame that anyone would destroy a Mary statue or any statue," said parent Debbie Keilholz. "I hope they catch them and something can be done."

"It's a big metal statue so it wouldn't just blow over on its own," said track coach Chip Malmstrom. "This is our third vandalism in just a few weeks." Malstrom said the statue of Mary was very expensive, and to replace it with another metal statue would cost a minimun of $1,000.

President of Helias High School Didier Aur said the statue was a memorial for Leon Vanderfelts, an alumnus of Helias.  Vanderfelts was given the statue from the Christian Brothers of Glencoe, Mo as a donation. He said it was in need of repairs. "Vanderfelts took care of all the repairs and paint," said Aur. "He even organized groups to set up a gazebo for the statue and a garden to surround it."

After Vanderfelt's death, his family donated a bench in his and his wife's name for a memorial.