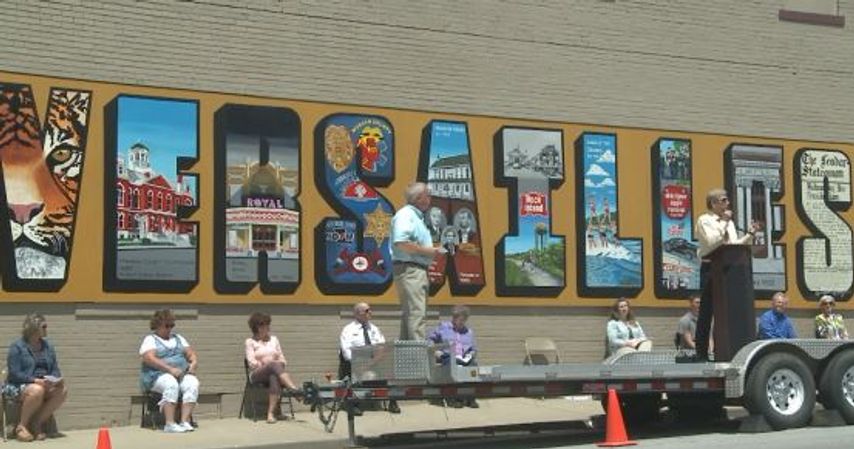 VERSAILLES – Over a hundred members of the community gathered to dedicate a mural in the downtown square of Versailles.

This project was developed by the newly formed Versailles Community Betterment. Each letter represents a facet of the towns history. The mural includes paintings like the historic Morgan County Courthouse, Royal Arts Council, and the Monroe County first-responders.

The artist of the mural, Jennifer Avey is a resident of Versailles and said she was happy to create something so meaningful for her town.

“I wanted to point out how great our town was and so we can all celebrate that,” Avey said. “ I think having a good turnout of people really shows that everybody else has the same thoughts too.”

Avey said her long history with the town, made it easy to complete the mural.

“I’ve lived here all my life. I love this town, it wasn’t very hard to fill up the letters,” Avey said.

Mayor of Versailles Terry Silvey said it’s volunteer work like this that makes the town a great community.

“What an outstanding job that they did, I can’t imagine the amount of time and effort they put into this,” Silvey said. “This mural has been long anticipated.”

Avey said she put a considerable amount of time volunteering to paint on the mural over the past year-and-a-half, around 60 hours of work on each letter.

“My husband lost the garage for quite a while, but my he and kids were such troopers. It was a lot of time,” Avey said. “It was tough but then again, this is something that I like to do. Art’s kind of my backbone. It keeps me sane at time.”

She said it will be extremely rewarding to drive by in the future and see her work always on display.

“I’m going to be here awhile, I’m not going anywhere and neither is that,” Avey said