Veteran Plow Driver Shows a Day in His Shoes 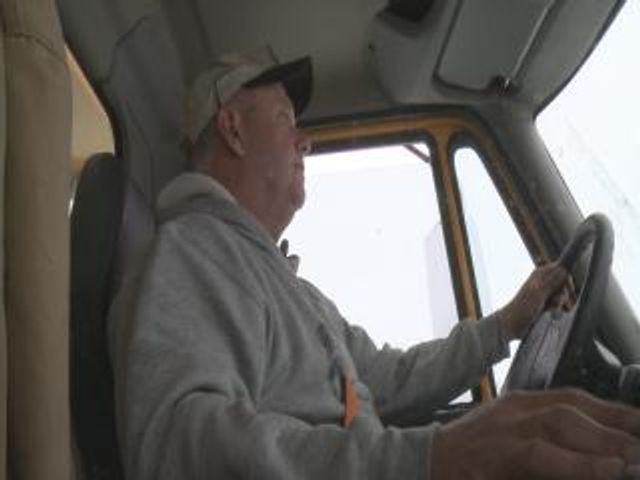 HALLSVILLE - While the state warned drivers to stay off the roads Tuesday, MoDOT snow plow drivers do just the opposite, trying to clear them. One veteran driver showed KOMU 8 News what it's like to make the rounds in treacherous conditions.

"After you do it so many years, it's just another day," said Rickey Smith. Smith has been with MoDOT for nearly 24 years now and said plowing during Tuesday's storm wasn't too different from other storms. He's used to it by now and says he likes it.

"My motto is go with the flow," Smith said. "It's only as rough as you make it."

He talked about how plow drivers had to work in teams Tuesday. He followed behind another plow driver as they both cleared the passing lane of U.S. Highway 63 from Vandiver Drive north through Hallsville and back. He said the stretch of the highway is his normal route, but usually drivers plow on their own. Since the wind blew the snow across the highway Tuesday, Smith said it makes more sense to work with another plower.

"That's our goal, it's to try to get both lanes open," Smith said. He calls it "gang plowing" and said on days like Tuesday, it makes the most sense. Sitting in the plow, he was in constant communication with his fellow driver ahead of him. He warned of upcoming cars, planned which lane they would clear, and talked about what the boss thought of their work. The plower ahead of Smith warned when Smith's plow looked like it wasn't down all the way.

"It makes the job a lot easier when everyone works good together," Smith said. "We've all been doing this for awhile."

Smith said his boss was in a truck too working on clearing ramps. He said if someone showed up at MoDOT this morning, they were in a machine. He worked the 6:30 a.m. to 6:30 p.m. shift Tuesday and said other drivers would take over from 6:30 p.m. to 6:30 a.m. He explained how all drivers are required to have at least an 8 hour break between shifts.

Smith is originally from Sturgeon but now lives in Fayette and commutes to Hallsville for work. During the summer, he is a crew leader for MoDOT working on piping, cutting brush, etc. He has a wife, a 20-year-old son who lives in Hallsville and a 32-year-old daughter who lives in Columbia.

"My daughter, she calls me all the time wondering if I'm working," Smith said. "If it's snowing, I'm working."

Smith said plowers try to stay between 30 and 35 miles per hour when driving. Since there is a front plow and a belly plow which is underneath the truck, he said going too fast wouldn't be as effective. He said the front plow pushes most of the snow off the road and the belly plow scrapes it down to the pavement.

As he drove, Smith adjusted knobs and pushed buttons that changed the way his machine plowed. He adjusted where the plows pointed, if they were raised or lowered, and if he wanted to blast the snow. He also watched a screen that gave him information about his truck. He said this truck is his first new one and MoDOT recently got new vehicles that he thinks work much better than the old ones.

Smith said he gets the call usually the day before the snow to show up for plowing. He said all the people working are pretty good friends and it's important they get along, especially when they see each other more than their families.