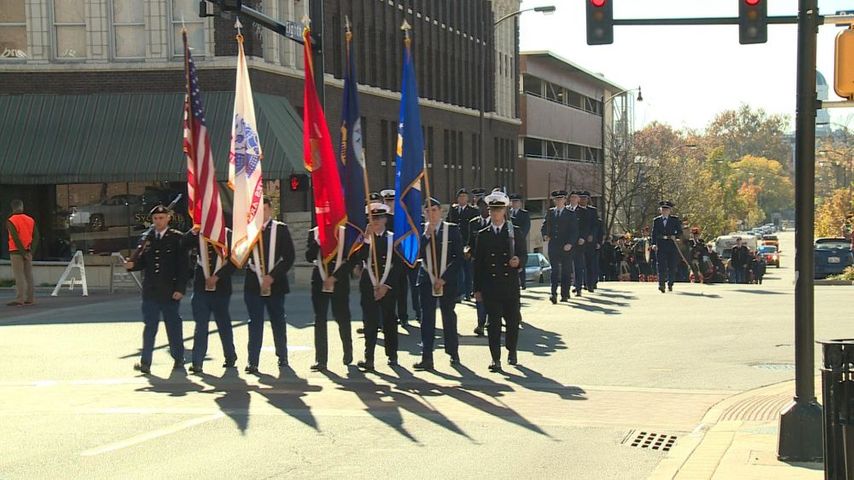 COLUMBIA - The 30th annual Veterans Day parade was held Sunday in Columbia to honor veterans as ushered by the University of Missouri's Air Force ROTC.

"It's a celebration! The vigil was 24 hours long. It was more of a solemn memory to the fallen veterans. The parade itself and the closing ceremony is more of a celebration. It shows off the past present and the future service members," said Air Force ROTC Cadet Laura Walker, Special Projects Staff Commander.

Beginning at 11:11 a.m. Saturday, there was a vigil outside the Boone County Courthouse. ROTC cadets took hour shifts to honor the fallen veterans. It ended 24 hours later, 11:11 a.m. Sunday.

Walker has been working with others to set this parade and ceremony up since August.

"We've spent, especially the past month, reaching out to the community and getting participation from various organizations that include veterans," Walker said.

Residents of Columbia and veterans watched as current ROTC members and other veterans made their way from Francis Quadrangle to the Boone County Courthouse in downtown Columbia.

"I really enjoyed marching along side the rest of the ROTC cadets because it kind of gives that sense of unity," said MU Air Force ROTC Freshman Daniel Calandro.

No matter how old or young, this event was a way to honor everyone and show a sense of patriotism.

"They know we are all in this together. 'One team, one fight,'" Walker said.

Calandro said he hopes that people realize how much these veterans have worked and hopes people in the community give back.