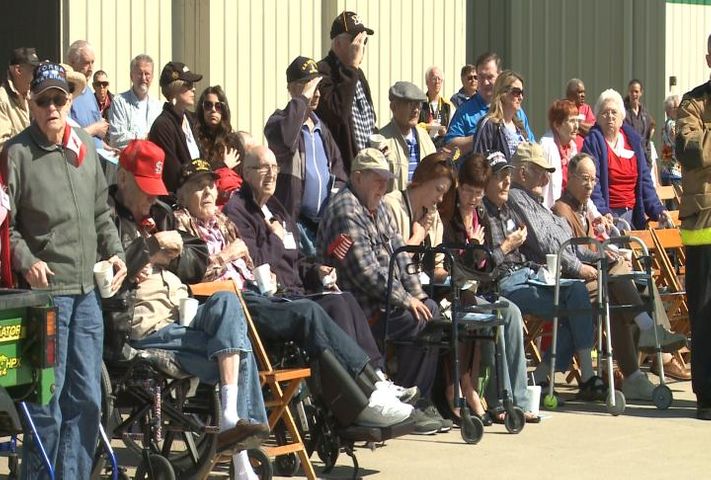 COLUMBIA - Organizers say more than 100 veterans turned out for a private air show Friday ahead of this weekend's Salute to Veterans Airshow.

Salute to Veterans Media Chair Nancy Fields told KOMU 8 News Friday's air show was a private event for elderly veterans living in mid-Missouri. She said many veterans from the World War II era have trouble getting around, so Friday's show lets them enjoy the aircraft demonstrations without having to deal with large crowds. She said the veterans are frequently excited to see the aircraft they used to fly and talk to the people who currently fly them.

Some of those pilots are veterans themselves. Norwood Bond was a Marine Corps instructor for the T-28 Trojan trainer aircraft for 18 months during the 1960s. He started flying the aircraft again after he retired from flying airliners in 1998. Bond said air shows like this one are a great opportunity to showcase an aircraft's capability, noting the T-28's performance rivals that of many World War II-era fighters.

Veterans are present in the show's volunteer ranks as well. Demo Team Liason Chair Dayton Shepherd flew C-130s in Vietnam from 1968 to 1969. He said events like Salute to Veterans give him a chance to give back to other veterans.

"Being a pilot, I just enjoy being out here and working, so it's a labor of love," he said.

Fields said federal budget cuts will have little impact on this year's show. She said the U.S. Army's Screaming Eagles parachute team will not attend this year but the All Veteran Parachute Team will perform in its place. She said Salute to Veterans did not lose any money due to cancellations by active military demonstration teams.

The Salute to Veterans Airshow runs from 9:30 a.m. to 3:30 p.m. on Saturday and Sunday at Columbia Regional Airport. Admission and parking are free.