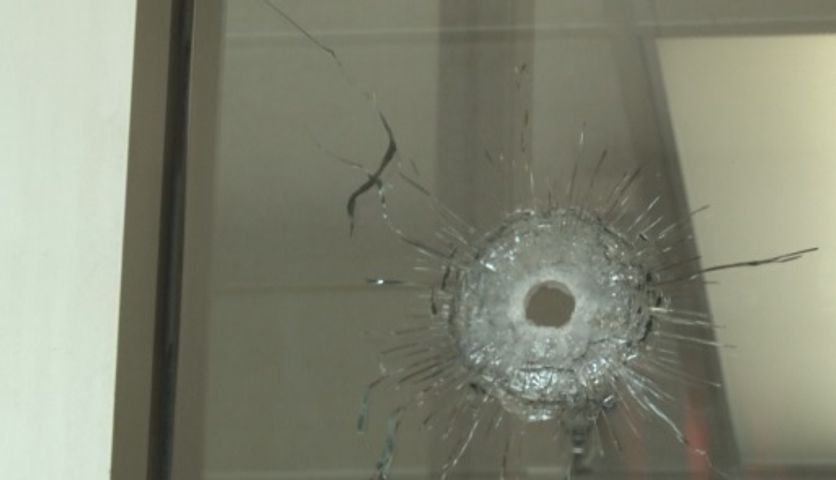 COLUMBIA - The Veterans of Foreign Wars Post is continuing its business after the shooting early Saturday morning that injured one man and three women.

The VFW was rented out for a promotional event for a new hip-hop album when the shots were fired. Police said the disturbance began inside the building that had about 200 people at the venue.

According to the police, someone fired a gun from the parking lot toward the building which hit four victims and parts of the building. All four people are still in the hospital. One of them was taken in an ambulance and required emergency surgery. The other three sustained non-life threatening injuries.

The building had damages to the entrances, glass panes and a steel door that was across from the entrance. The staff at VFW started cleaning up the blood and shattered glass around 5 a.m.

Kim Wischmeyer is the quarter master and the canteen manager at the VFW. He was bar tending the event when he heard the fight around 12:30 a.m. Wischmeryer said the fight was broken up by security and one man was taken outside. Another man was being escorted when a girl yelled there was a gun.

"Everybody scrambled to get out and there were several shots fired," Wischmeyer said. "There was a lot of blood throughout the house."

Wischmeyer said they plan on continuing their business as usual today.

"We got all the repairs made and we have one small repair to make to a door. We're ready to go again," Wischmeyer said. "We got events scheduled today and we got to keep it clean and let everybody know it's safe. We had people coming in while we were cleaning the blood up, measuring up for the weddings and stuff."

Wischmeyer also said they are changing the policy concerning the deposits. There will now be a large damage deposit along with the beginning deposit for those who want to rent out the facility.

"I think it's ludicrous that cowards like this young man who came with the pistol desecrate those who gave him the right to carry the pistol," Wischmeyer said. "He has no idea what life's about yet and most people don't but this is a veteran's home."

Two people who attended the event said the incident does not mean that Columbia is becoming more dangerous. They also expressed that other venues around Columbia should get more security and police present like downtown Columbia gets.

They did not want to be identified.

The Columbia Police Department is still looking for one to three black male suspects. If you have any relevant information, you can contact the CPD at (573)-874-7652 or call CrimeStoppers at (573)-875-TIPS to remain anonymous.